How A Sociologist Hid Her Pregnancy From The Web 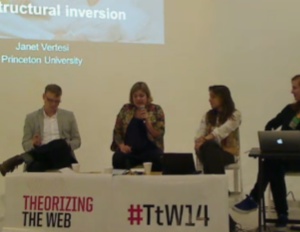 Janet Vertesi spoke about buying hundreds of dollars in Amazon gift cards to hide from marketers.

The value to advertisers of an expecting mother is an order of magnitude higher than the average consumer, according to Mashable.

In her presentation on Friday at the Theorizing the Web conference in Brooklyn, Janet Vertesi, sociologist of science and technology at Princeton University, discussed the big data, its unintended impact on daily, and the potential value of your data to marketers.

By calling family and friends to spread the news and ask that they keep the information off the Internet, Vertesi prevented social networking sites like Twitter and Facebook from gathering information on her pregnancy.

She even deleted family members that privately messaged her, stating that all of Facebook was being monitored, even the “privateâ€ messages.

In order to keep her purchasing data private, Vertesi used cash exclusively to buy items related to her pregnancy. Amazon.com gift cards were purchased with cash whenever she needed to purchase an item online. By using an Amazon.com account associated with an email address hosted on her own server, she was able to prevent the data mining Google, Microsoft, and other email providers use to sell to marketers and target consumers.

She used the “privateâ€ email address to create an Amazon.com account funded by the cash-bought gift cards, making it impossible to track who the actual purchaser was using credit cards.

There were some drawbacks to Vertesi’s plan to hide the news of her impending offspring from the eyes of Big Data, including one where the purchase of $500 worth of Amazon gift cards for a stroller resulted in a notice from Rite-Aid that stated excessive transactions would be reported to authorities.

Vertesi also praised Tor, a private Internet browsing service that lets you browse the web anonymously, making it nearly impossible for advertisers to see who is truly looking at what. “I really couldn’t have done it without Tor, because Tor was really the only way to manage totally untraceable browsing,â€ Vertesi said. “I know it’s gotten a bad reputation for Bitcoin trading and buying drugs online, but I used it for BabyCenter.com.”

You can watch all of Janet Vertesi’s talk below.