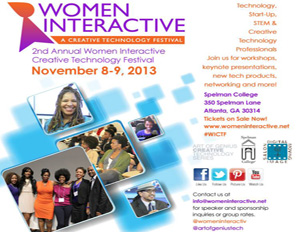 Getting started: Drawn to tech through her work in the music industry, Harvey met Sims, a natural born blerd since her pre-teen years, while working on a project as a consultant. The two hit it off, connecting over conversations about women in tech and content production.Â  After launching FridayGirlTV, an online destination featuring episodic and short form programming geared toward women, the duo received numerous questions about what it takes to produce web-based content. They started hosting workshops and officially launched Art of Genius in 2011.

From that, Women Innovate was born and the first conference kicked off in 2012.

Atlanta’s thriving tech scene: “Atlanta has this really vibrant and active startup technology community. It has been growing by leaps and bounds in maybe the last two or three years as people realize that this is a really great city to come [to]. There is a lot of innovation here.Â  You have the different universities like Georgia Tech. You have a lot of companies like Turner [Broadcasting] that are based here, so there’s a lot of talent here and there are a lot of people interested in doing really cool things,â€ says Sims.

Ladies first: “When you are a creator, not only do you have a seat at the table but it’s another form of economic prosperity, which is important not just for women of color, but for people of color,â€ Harvey says. “That can be a little form of economic prosperity for our communities and who better to lead that charge than women.â€ Sims believes with the production of content and technology, a woman’s voice is essential to diversifying what’s being created. “Let’s encourage more women to open the door, and sit at the table.â€

Innovators make their own rules: “When you’re an innovator, you kind of have to have this fire in you to speak out even when it may not be the most popular train of thought at the moment…and really not be afraid to break barriers, go against the grain,â€ Harvey says.

It’s never easy, but the innovative team puts their fears and reservations to the side for their calling. “An emotion that a lot of people may not equate to being an innovator, but it’s very much there, is fear, especially, like Sabrina said, going against the grain and being a civil anarchist, and not only just sitting at the table but kicking in the door with your stilettos and pulling up a chair whether you have a space or not,” says Sims.”