Women of Power: Voices From the Conference 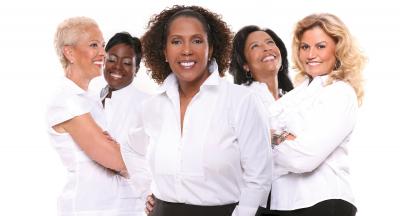 Tracci Reaves-Diggs, director of operations and co-founder of Reaves-Diggs Parham & Associates and Krystal Vaughan, a program director with the company

RDP establishes group home facilities for at-risk youth in Virginia. It is Reaves-Diggs’ third year at the Women of Power Summit. Since she is so busy as director of operations for RDP, she considers the conference her official getaway.

She attends the conference because she learns how to improve the quality of work and make the bottom line better.

At the conference, “I am able to interface with larger organization and talk to peopleâ€ that I wouldn’t normally be exposed to, she said.

The summit also challenges the way Reaves-Diggs thinks about things. During the cocktail reception before the Legacy Award dinner she recalled a past conference where she asked a question, but instead of answering her question, the panelist turned the question around, and Reaves-Diggs said she saw the situation in a completely different light. “It takes you out of the fishbowl that we live in and enhances your perspective.â€

With her, was Krystal Vaughan, a program director with the company. While her boss is a Women of Power veteran, Vaughan is a first-timer. She was really excited to be in attendance, and hopes to use her time at the conference to “learn how to get to the next levelâ€ in her career.

Definitely on Vaughan’s agenda is attending the Young Women’s Professional Primer. She says her ultimate goal is to start a home for teenage mothers. She even has the name picked out. But she also is considering going into marriage therapy. But her career choices aren’t mutually exclusive, and Vaughan is considering both.