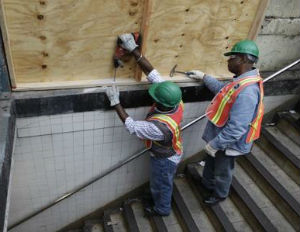 As much of Â the East Coast stumbles back online after being walloped by Hurricane Sandy, New York City transit workers are racing to get the Big Apple’s vital subway system up and running again after many stations lost power or were flooded with seawater. But as Colorlines’ Jamilah King points out, at least 60 percent of the public-sector workers who maintain the city’s subways are black or Latino:

The city has been operating with a patchwork subway system since Sandy, with crowded shuttle buses filling in for subways and clogging up traffic. Gov. Andrew Cuomo of New York said that the city might need to rethink its subway infrastructure to make it less vulnerable to extreme weather events like the storm.

Read the whole story at ColorLines.