This Swim School Franchise Owner Proves; Yes, We "Own" Swimming 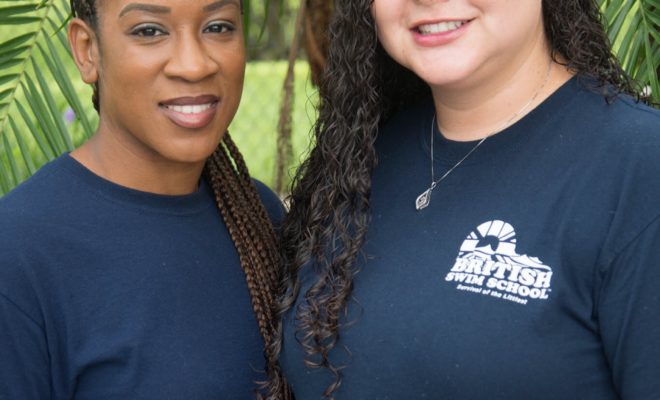 It’s been an exciting year for Karese Cain, co-owner of a British Swim School franchise in Miami. Not only has she been profiled in the media—now she’s looking to expand after less than two years into the business.

For someone that never considered business ownership, Cain’s story is quite remarkable.

Taking the Dive into Franchising

The Howard University graduate started working at the British Swim School part-time for three to four years, where she met fellow instructor and future business partner, Maybelline Yurco. The Center that Cain and Yurco were managing and teaching at, was one of the top performing locations. To their surprise, the COO of the franchise informed them that the site was going to put up for sale, and wanted them to consider purchasing it.

Yurco, having had some previous business experience, was immediately excited about the opportunity and talked to her father about funding options. Cain, on the other hand, was quite apprehensive, as she had never considered the idea of being her own boss, or running a business. Just the idea of being able to pay herself and a business was daunting. But after further consideration, she felt the reward was more powerful than the risk. She believed in herself, her partner, and the franchise.

Selecting a Franchise That Represented Her Passion

There were several factors that helped push her over the “fear” line when purchasing the franchise, however, a few key points really stood out. The investment in the business was manageable, due to the model. British Swim School leverages local fitness centers, as well as public and private pool facilities to provide swimming classes. This keeps overhead costs low, and allows owners to grow the business by offering a variety of classes, at various sites, at various times.

Secondly, swimming is something she is passionate about. Cain’s mother first enrolled her in swimming classes in her home country of Jamaica when she was 2-years-old. She fell in love with the water, and grew up swimming competitively. She enjoys sharing her passion for swimming with others, and really connects with the franchises goal of enabling and empowering children to feel comfortable in the water, while being safe.

Cain’s Advice on Purchasing a Franchise

One might think that Cain gets surprised reactions from people when they find out she owns a swimming school. On the contrary! Because of the diversity of the community that surrounds them, close to half of her students are black. Yurco, who is also an immigrant, sees their ethnicity as a plus, as it helps both parents and children feel more comfortable, by combating many of the prejudice and stereotypes that surround swimming. In addition, as one of the very few minority owners, they garner a level of publicity that other owners don’t necessarily receive, which is always great for business. They are both excited to see more black and Hispanic owners investing in the franchise.

Cain has valuable advice for those considering purchasing a franchise business:

Sports instruction is a $5 billion industry, and is one of the fastest growing industries around—slated to grow at a rate between 3-5% this year. With the ability to teach classes all year round due to indoor and outdoor pool facilities, an owner of a swim school can gross over $1 million in sales annually. With the passion, expertise, and dedication Cain and Yurco have, I’d say they are well on their way.