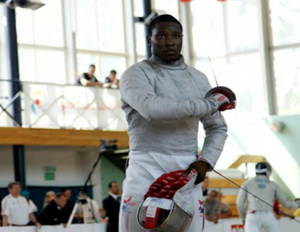 The 21-year-old fencer is a two-time NCAA national title holder, three-time fencing world champion, and currently ranked #1 in the US and #12 in the world (Image: The Grio)

By Marquise Francis of The Grio

Daryl Homer isn’t what you would call your typical successful young black athlete. He doesn’t dominate a sport with a ball or play anything that has to do with a basket. Those that he competes against don’t look like him and yet on the biggest stages, Homer produces his best performances.

The Bronx native is a 21-year-old two-time NCAA national title holder, three-time fencing world champion, currently ranked #1 in the US and #12 in the world, and is the youngest member of the 2012 USA Olympic Men’s Sabre Team competing in the London Summer Olympic games; and he has still yet to finish college.

With one year left, Homer has put school on hold for the time being in pursuit of his fencing career. Homer has been immersed in fencing culture since he was a kid. He started when he was 10 at the Peter Westbrook Foundation, a program focused on introducing fencing to inner city youth. As he became successful he caught the eye of an Olympic coach Yury Gelman who continues to coach him to this day.

“Fencing is definitely a culture shock,â€ Homer said. “But I started out fencing with 90 percent black people at Peter Westbrook.â€

Homer calls himself fortunate. Growing up he had professional Olympic role models in the same training gym he was. He saw people doing the same thing he aspired to do in the future, including Keeth Smart and Erinn Smart.