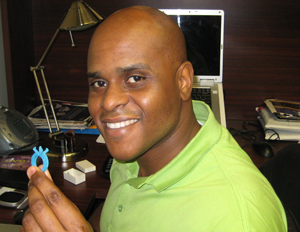 We now live in an era of extreme customization. In this new wave of industrialization, the old-school rules of mass manufacturing no longer apply.Â  And boutique businesses like Deerfield Beach, Fl.’s ZShock are poised to reap the rewards.

The custom jewelry company has used 3D printing since its inception in 2008. Founded by Steve Alexis and Sako, ZShock boasts a VIP clientele, which includes Chris Brown, Nicki Minaj, Teyana Taylor, Diggy Simmons and Soulja Boy, to name a few.

The two brothers-in-law were inspired to invest in digital printing after noticing a slow, but steady increase in individual design requests sent to their flagship company Diamondov. “The more business we did, the more we started noticing and receiving requests, so we decided to start a niche business and branch out,â€ says Sako.

At first, ZShock would send their design orders to a subsidiary printing company, but as the demand for their services increased, so, too, did their desire for flexibility.Â  “Having direct access to a 3D printer lets you do things you never would have imagined before,â€ adds Sako. Â “I mean, we work with rappers… these guys are very creative and have really wild ideas.Â  It just lets us commit to a whole new level of detail and precision.â€

Alexis, the head of creative at ZShock, agrees. “Everyone doesn’t want the same thing, but we all want high quality.Â  They [our clients] are experienced in expecting items of quality, and that’s where 3D printing comes in. They are going to feel confident that the jewelry they wear is precise and up to date.â€

For most design companies looking to invest in a 3D printer, the price tag can be off putting. The average industrial printer can cost upwards of $1 million.Â  However, as more printers flood the marketplace and patents begin to expire, the cost of 3D printers is decreasing. Companies like MakerBot or ShaperCube sell build kits starting at roughly $1,000.

Bill Dahl, director of marketing and communications at Solidscape, the company that equipped ZShock, believes that in the long run, opting not to invest in 3D printing will hurt small businesses. “You have to consider the total cost of your work flow,â€ says Dahl.

Each ZShock creation is developed in house, employing a small team of jewelers to help execute specialized, custom designs for various pieces from G-shock watches to gold-plated rings. “We did a necklace for Sean Kingston that said ‘POW!’ in different colors [of precious stones].Â  When a performer [like him] is on stage and a fan is standing 3-4 feet away, the piece we produce cannot afford to look bland, or poorly cut.â€

The level of detail required for each piece is not the only reason Sako and Alexis chose to go with their Solidscape printer. The innovative jewelers believe the key to their success is tied to their willingness to adapt quickly to emerging technologies. Buying a 3D printer at a time when few jewelry businesses were doing so was a surefire way to gain a competitive edge. By their own estimates, 3D printing has allowed ZShock to cut their production time in half.

“Before it was a much longer process because you simply did not know what you were going to get,â€ says Sako,Â  “whereas now, we know that whatever we put into the computer is exactly what we’re going to get.â€

For individual entrepreneurs who may not have the same level of financial backing, or production support, as ZShock, 3D printing marketplace Shapeways offers another option to staying competitive. Small business owners can simply upload their design files, and let Shapeways take care of the rest. Their services include production, shipment, and even customer service issues.

Duane Scott, an industrial designer and communications lead at Shapeways, explains that 3D printing “is the exact opposite of mass production. With 3D printing, the gap between what you want and need narrows. It’s now become cheaper, easier, and faster [to produce].â€