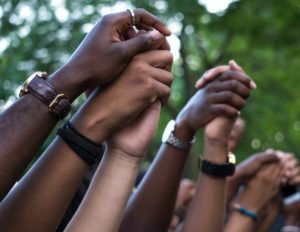 The Association of American Colleges and Universities has announced the selection of 10 institutions that will serve as the first sites for Truth, Racial Healing & Transformation Campus Centers.

“We invited institutions to submit proposals that would implement a three-year plan,” says AAC&U President Lynn Pasquerella, to develop TRHT centers that would develop “meaningful partnerships with community organizations already engaged in this work.

“But the overarching goal is to jettison a belief in a hierarchy of human value,” she continued. “And what we’ve seen across the country—and Charlottesville is a reminder of that—is that the legacies of slavery and racism are still with us. We won’t be able to overcome them until we address the truth about our nation’s history, about institutional racism, and how higher education has been complicit in that.”

At each school the work of the TRHT Center will look different. Pasquerella told me that some are focusing on specific initiatives around community policing; others are establishing themselves visibly as a resource in their local community; still others are drawing attention to the many black scholars and other scholars of color whose voices have historically been marginalized.

AAC&U will provide intensive advising to the 10 campus centers, and there is also an external monitor of the program. In addition, AAC&U is accountable to the W.K. Kellogg Foundation, a generous supporter of the campus centers, along with the Newman’s Own Foundation.

Although Pasquerella told me that not all institutions were at the advanced stage, and I haven’t spoken with representatives from any of the other nine schools, it’s hard for me to imagine a more advanced program than the one at the University of Maryland Baltimore County.

In a sense, UMBC has been doing social justice work for roughly 30 years. The school has a Shriver Center on campus, the goal of which is to apply the university’s resources to the pressing needs of those in its community.

Choice Program participants, Davis told me, “learn about the issues youth and families are faced with within the criminal justice, education, and social service systems. They learn about the resources available to those families and how systems that are designed to serve them are working and not working.

“They learn how to be a leader—with your voice, your actions, from the front of the line or the back of the line—to reduce disproportionate minority confinement and placements for kids of color….” in foster care and the school-to-prison pipeline.

“This program is here because we have an amazing university president [Freeman Hrabowski] who doesn’t just want to serve the best and the brightest but who asks how we can serve those youth and families that have the greatest need,” Davis says.

“For too long higher education has been viewed as taking place within the ivory tower, apart from the practical matters of everyday life,” Pasquerella told me.

“More than ever we need to make ourselves visible to those who are the most marginalized, the most vulnerable, to not only serve as public intellectuals, but to partner with K-12, business, industry, and community members to ensure that future generations are not living within a system of racial hierarchy.”