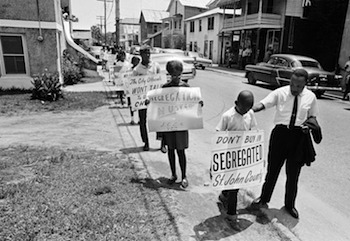 Today, July 1, marks the beginning of #Freedom50, the commemoration of 50 years since the enactment of the Civil Rights Act on July 2, 1964.

Regarded by political historians as a landmark piece of legislation, the bill outlawed discrimination on the basis of race, color, religion, sex, or national origin, and ended public segregation. For the generation that had to live through it, they endured a bloody struggle to receive human equality in the United States. In the face of determined opposition from white supremacists, leaders emerged to lock horns to see who would end up on the right side of history.

As we commemorate #Freedom50, the masses still in the fight for all equality for all people can look at these images and reflect on the journey yet to come.

Take a look at these photos which show activists’ determined fight to gain racial equality right here in the USA, interspersed with a surprise or two.