Facts About the Sport of Golf 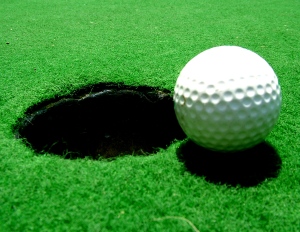 From Thursday, August 28, 2014 to Sunday, August 31, 2014, the next installment of Black Enterprise’s Golf and Tennis Challenge will take place in Palm Beach Gardens, Florida. We want to help you out in case there were some things you didn’t know about the sport of golf.

1. Golf is, by definition, “playing a ball with a club from the teeing ground into the hole by a stroke or successive strokes in accordance with the Rules.”

2. Golf competition is generally played for the lowest number of strokes by an individual, known simply as stroke play.

3. The modern game of golf originated in 15th-century Scotland.

4. A “round” of golf typically consists of 18 holes that are played in the order determined by the course layout.

5. A maximum of 14 clubs is allowed in a player’s bag at one time during a stipulated round.

6. A hole in one (or an “ace”) occurs when a golfer sinks his ball into the cup with his first stroke from the tee.

7. In 2005, Golf Digest calculated that the countries with most golf courses per capita, starting with the best endowed were: Scotland, New Zealand, Australia, Ireland, Canada, Wales, United States, Sweden, and England (countries with fewer than 500,000 people were excluded).

9. The major championships are the four most prestigious men’s tournaments of the year. In chronological order they are: The Masters, the U.S. Open, The Open Championship (referred to in North America as the British Open) and the PGA Championship.