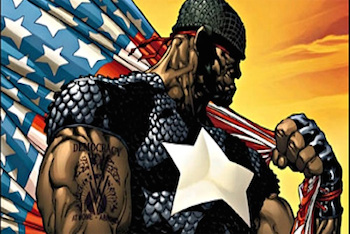 Several years and a day after Thor was changed into a woman, Marvel announced that Captain America will once again be a black man.

Hitting stores this November comes All-New Captain America #1, which will find Steve Rogers (the original Captain America) unable to answer the hero’s call. He hands over his shield and stars and stripes uniform to his longtime friend, and fellow Avenger, Sam Wilson. Soon to be formerly known as The Falcon, Wilson becomes just the seventh person to don the Captain America persona, and the second African American to hold such a distinction.

Yet, it seems that hardcore comic book fans aren’t ready to accept the changeover.

Such news is similar to the utter shock waves created when Marvel introduced a new Spider-Man in the form of black and Hispanic, Miles Morales. When Donald Glover announced that he would like to play that version of Spidey on the big screen, the angry comic book community clung tightly to the notion that only Peter Parker (see: white) could be our friendly neighborhood superhero.

Years ago in 2003, the Marvel Universe changed the pigmentation of Captain America, by re-examining the inspiration for the tale. Utilizing the Tuskegee Experiments as an origin, a man known as Isaiah Bradley would ultimately b become the Super Soldier that Americans came to know and love. Titled Truth: Red, White & Black and published from January 2003 to July 2003, the series spawned riotous conversations pegged to race in comics.

Now, as comic book fans are once again introduced to a person of color taking over a well-known white persona, Twitter has chimed in with its feelings on the subject. We took down 10 of the most interesting reactions for your perusal. Enjoy!