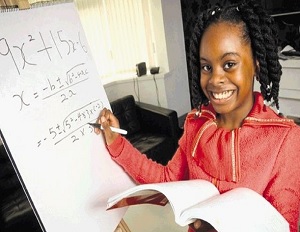 Similar to most 10-year-old girls, Esther Okade is a huge fan of Disney’s Frozen and loves to play with her dolls. However, unlike most kids her age who are trying to get a grasp on their elementary school lessons, Okade is miles ahead and already working on her undergraduate college degree.

As one of UK’s youngest university students, Okade is currently studying for a math degree at Open University. Having enrolled in the program just three weeks ago, Okade is already at the top of her class and is beyond excited to be at the school.

“From the age of seven, Esther has wanted to go to the university,” her mother, Efe, told The Telegraph. “But I was afraid it was too soon. She would say, ‘Mum, when am I starting?’ and go on and on.”

The young England native applied to the university program last August, and after a phone interview, essay and math exam, she finally got the news that she was accepted into the school in December.

“Esther talks about running her own bank one day,” her mother added. “She has a lot of plans, and talks a lot about finances.”

Esther isn’t the only young genius in her family who has a love for math. Her 6-year-old brother Isaiah is following in her footsteps and is already doing calculus and advanced algebra.

“Even when he was in my tummy, Esther was already teaching him,” her mother said.

This Day In History: First Black Woman to Receive an M.D.