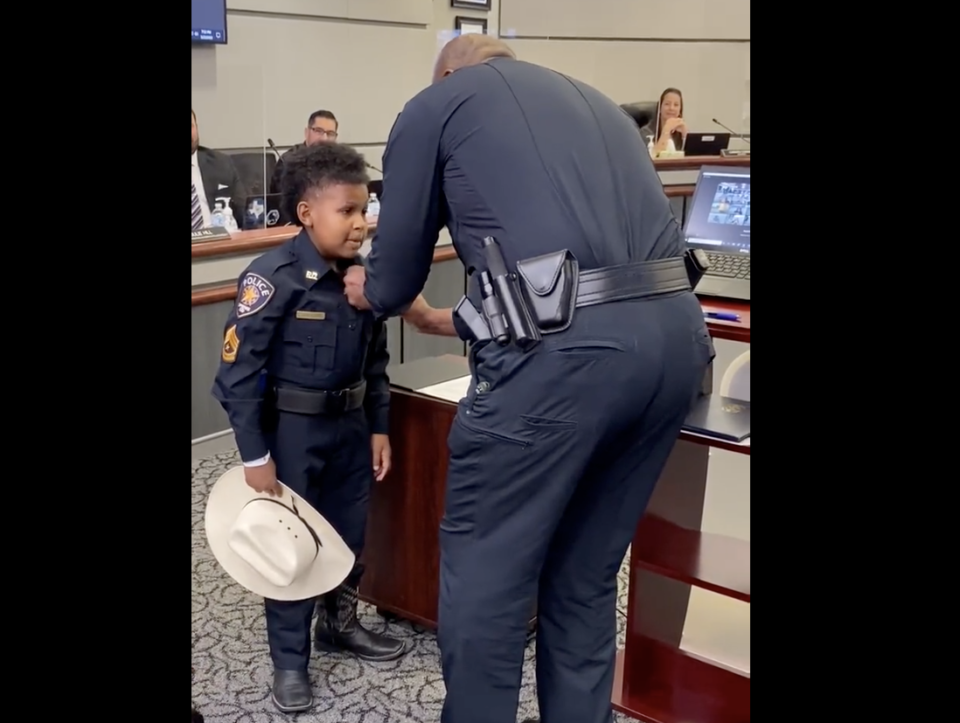 Devarjaye “DJ” Daniel, a 10-year-old diagnosed with terminal metastatic anaplastic ependymoma brain and spine cancer three years ago, has become an honorary police officer for numerous law enforcement agencies. His initial goal was to be sworn into 100 police agencies, according to Fox 26.

As a resident of the Houston area, Daniel has now been sworn into more than 400 police departments across the nation as he undergoes cancer treatment, the Community Impact Newspaper reports.

The fifth-grader decided to follow in the footsteps of his military father, Theodis Daniel because he wanted to replicate the synergy he saw when his father communicated with people in uniforms and decided on a career in law enforcement, Fox 26 reports.

Daniel is on a quest to raise awareness about pediatric cancers while being sworn into numerous police agencies. On March 21, Daniel was appointed the first-ever honorary assistant chief of the Jersey Village Police Department.

On March 22, Daniel took the official oath at the board of trustees meeting to become an honorary sergeant of the police force that serves the Spring Independent School District, according to The Houston Chronicle.

“Sergeants help shape the next generation,” Spring ISD Police Chief Ken Culbreath said to The Chronicle. “They’re with the ground-level troops helping keep them out of trouble. The sergeant’s position is key to making sure the operations that happen in the field are connected to what’s coming from the chief or administration.”

Congratulations to Devarjaye “DJ” Daniel on becoming an honorary member of the @Spring_ISD_PD! DJ is battling brain and spine cancer, and set a goal to be sworn in by 100 law agencies to raise awareness on childhood cancer. He is now at over 400! #BelieveInSpring 💙 @Shuester pic.twitter.com/9aqckiSdpS

Spring ISD Police Officer Jarrod Morton marveled at the youngster’s determination and strength despite his prognosis.

“He’s still going out, meeting people and doing the things he’s wanted to do,” said Officer Morton. “With living with the type of cancer, knowing there’s no cure, he still gets up and goes forth to bring a smile to people’s faces. He can still do whatever he puts his mind to. It’s something that he’s not letting his diagnosis define who he is, he still gets up every day whether he’s in pain and decides to do that job.”

On March 24, Harris County Emergency Services District No. 9 swore Daniel in as an honorary commissioner, according to the Community Impact Newspaper.

Daniel is carrying on the legacy of Abigail Arias, a 7-year-old who aspired to work in law enforcement before succumbing to cancer complications, officials said.

Sammy Parks created a  GoFundMe page for Daniel to pay for his medical expenses.