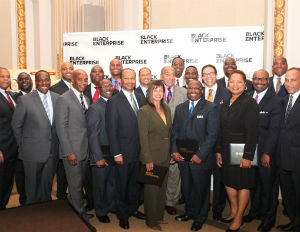 Published in the magazine’s September issue, the listing shines a bright spotlight on the achievements of African American business leaders who have risen to the highest-ranking corporate positions and hold revenue-generating and operating responsibilities critical to, among other areas,Â  product development, sales and supply chain management at some of the world’s largest publicly-traded companies.

“We know that only the best and brightest can excel in the C-suites of the nation’s largest corporations, and that highlighting the achievements of African American executives who not only set, but are raising the bar of excellence, will inspire others, including younger African Americans, to aspire and dream to be you, just as you were once inspired to pursue your career paths.” said Black Enterprise CEO Earl “Butch” Graves, Jr., sharing the significance of the list and importance of the recognition ceremony.