10th Women of Power Summit Most Successful of All Time 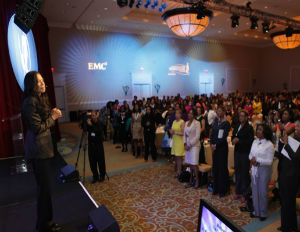 Last week, Black Enterprise’s 10th Women of Power Summit, hosted by State Farm in Ft. Lauderdale, Florida, is being touted as the most successful of all time boasting attendance and sponsorship records making it a true success. “It was the biggest. For year ten, we wanted every woman who wanted and needed to be there to come. So we left registration open and crossed the one thousand mark,â€ says Caroline Clarke, editorial director of the Black Enterprise Women of Power Summit and host ofÂ Women of Power TV. “The great surprise was that even with the bigger audience, we didn’t compromise any quality or that key sense of intimacy. The women still connected with the content and with each other in ways that made a deep and lasting impact. That speaks to the relevance of the content and the way we presented it, but it also speaks directly to the enthusiasm of the attendees and their genuine desire for what the Summit offers.â€

This year’s summit featured confirmed speakers including the first male to speak at Women of Power, McDonald’s Corp. President and CEO Don Thompson. Other highlights included an intimate one on one conversation with Ariel Investments L.L.C. President Mellody Hobson. President & CEO of Smith & Co. Judy Smith wowed the crowd, while Motivating the Masses CEO Lisa Nichols and America’s first African American female combat pilot Vernice “FlyGirlâ€ Armour both took over ballrooms to empower. Managing Director at Morgan Stanley Carla Harris moved ladies at a beautiful beachside all white event deemed “Purpose and Pearls.â€ While inside women felt safe and comfortable enough to share their stories of pain during the Terrie Williams moderated panel “Pain to Powerâ€ featuring psychiatrist Dr. Janet Taylor as one of the panelists. Packed full of leadership workshops, executive coaching sessions, effective peak-performance and work-life balance techniques; topics range from creating visions boards and crisis management to style coaching, managing social media, and corporate board recruitment. Nightly events honored the nation’s powerful corporate women and those who’ve created legacies that will impact the ages. “We launched with an all new Purpose and Pearls Beach Party, rather than the Legacy Awards,â€ says Clarke who’s been with the Summit since its very first event, ten years ago. “This enabled the women to meet and circulate at the very start of the event — reconnecting with old friends and colleagues as well as establishing new connections that had the full length of the Summit to grow.â€

The addition of technology also helped Women of Power overachieve previous goals. With page views higher than normal hitting nearly half a million for the week of Women of Power, live-streaming allowed those unable to attend to view specific sessions from their office or home. And for registrants, Black Enterprise offered the new BE Events App to notify attendees of panels, location changes, and the assorted offerings that Women of Power offered over three days. “Companies see the value. Those who return to Women of Power each year is significant, about 90% of registrants,â€ says Black Enterprise’s vice president and director of events, Sherry Herbert. “That’s evidence that people are going back and talking to women with a need to bring more. They want to be in a room with women like them.â€

Also seeing an increase in the attendance of millennials this year based on BE encouraging registrants to bring mentees to experience the inspiration and knowledge, this year’s Women of Power Summit knocked all expectations into a place beyond imagination. “It was extraordinary,â€ says Clarke “We knew it would be. It always is. But even we were blown away.â€