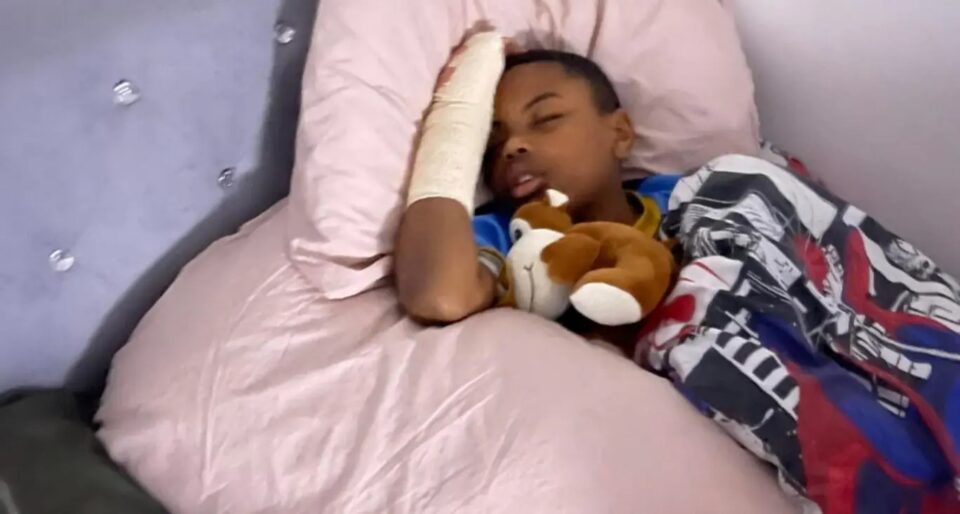 Eleven-year-old Raheem Bailey was forced to have a finger amputated after running away from racist bullies that have been tormenting him for months, says his mother Shantal Bailey in a heartbreaking Instagram post.

Since the start of his attending Abertillery Learning Community in South Wales in September of last year, Raheem has been racially and physically abused by a group of racist students at the school. On Tuesday, May 17, the bullying reached a shocking peak when Raheem attempted to escape his tormentors by jumping over a fence and in the process broke his finger in two after it got caught in the wire.

“Raheem was attacked and beaten by a group of children whilst in school. He was pushed to the ground and then repeatedly kicked,” Shantal shares in the post. “Consequently, Raheem made a desperate attempt to leave the school grounds in order to escape the situation. I received a phone call from Raheem and then the school informing me of the incident.”

The 11-year-old’s mother says the day before the incident, he called her crying while she was at work and told her of the bullying. Instead of the attackers being reprimanded, Raheem said “the teacher threatened him with detention despite him being the one that’s getting picked on.” She went to the school after work to put a stop to the situation and left assured that the bullies would be handled the next school day.

Shantal goes on to detail the next horrific moments she and her son were forced to endure after they were told an ambulance wouldn’t come for Raheem for two whole hours. She says she was told by school officials not to drive her injured son herself.

“Raheem, his baby brother and I were taken to a minor injuries unit by the school bus, despite them knowing that his injury was severe. We spent the next five hours waiting for an ambulance to transfer us to the location where he would undergo surgery, in Swansea, 50 miles away from his home and school.”

She continued, “As time rolled on, it became more apparent that the possibility my son was going to lose his finger was a real one. The doctors then confirmed this was likely. I had to explain this to him while he sat there in agony.”

After finally arriving at the hospital, surgeons spent six hours trying to reattach the child’s finger, but were unsuccessful. She also adds that the Abertillery Learning Community did not make contact with her to check on Raheem after the traumatic injury.

According to BBC, a Welsh government spokesperson said: “We condemn bullying and racial harassment in any form and expect allegations and incidents of bullying and racism to be fully investigated by schools with appropriate action taken to address the matter and prevent further instances from happening.”