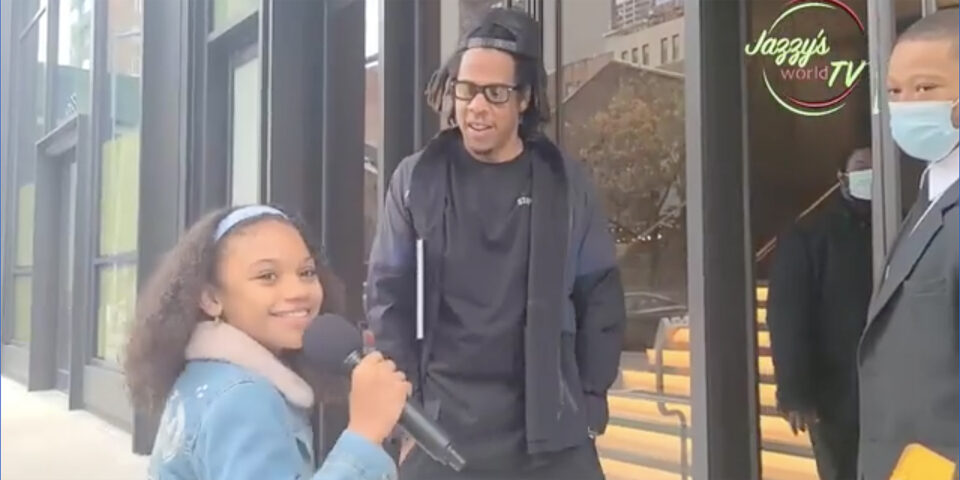 This 11-year-old journalist from Bushwick, Brooklyn is racking up interviews with some of the biggest artists, athletes and other influential figures in the industry—including hip-hop legend and billionaire businessman Shawn “JAY-Z” Carter.

Jazlyn a.k.a Jazzy, is going viral after her recent interview with rapper JAY-Z.

On Monday, she posted the one-on-one conversation on social media, earning her 2.3 million likes on TikTok. On Instagram, where she has 23,000 followers, the clip amassed over 53,000 views.

“The 🐐 @jayz shares a few tips for success with me & other kids watching. Part 2 drops Friday! Thanks so much for sharing time with me,” she wrote in the caption.

Jazzy asked JAY-Z on a sidewalk in New York, “To all the kids that have dreams of being successful like you, what advice could you give them?”

JAY-Z replied, “Believe in yourself, even before anyone else believes in you. You’ve got to have ultimate confidence, like you do. You’re very confident.”

At the end of the conversation, he noted again to “just believe in yourself.”

Last month, the sharp young reporter posted videos of an interview with rapper-songwriter and entrepreneur Nas. In the interview, she asked him, “Growing up in Queensbridge, what were some of the toughest obstacles that you had to face and what was one of your biggest motivations to succeed?”

Nas said to Jazzy, “Growing up, there were a lot of distractions from education…I had a lot of friends. It was a lot of parties, a lot of hanging out and being a mischievous kid took me away from school for a while, but now I know education is the most important thing.”

In a second clip, Nas—whose motivational “I Can” anthem inspired the minds of many children in the early 00’s—closed the interview out with some words of encouragement for viewers watching Jazzy’s show.

“Already, I can tell you’re very intelligent and you have the heart to do what you’re doing. You’re motivated. You’re focused. And you’re a beautiful kid,” he told Jazzy. “I think you have a talent and the skill. Just work on that talent, work on that skill. Don’t let anybody tell you you can’t do anything you want to do. You can do anything you want to do. You’re already doing it. At 11-years-old, I don’t know what I was doing; but nothing this cool, nothing this smart. So, keep doing what you’re doing.”