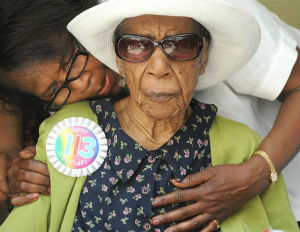 Susannah Mushatt Jones was recently named the world’s oldest person, inheriting the title after 116-year-old Jeralean Talley passed away in Detroit on Wednesday. The 115-year-old woman will turn 116 on July 6. Jones currently resides in Brooklyn, and was born in Alabama in 1899. She remains one of only two living people who were born in the 1800’s.

With over 100 nieces and nephews, Jones is as alert as ever. Although she lost her eyesight and has a hard time hearing, she isn’t bound to her bed, and even has a birthday party planned. Jones, born the third of eleven children, is the only sibling still living. She credits “sleep” as the secret to a long life; as she spends 10 hours of her day sleeping, and her faith in God.