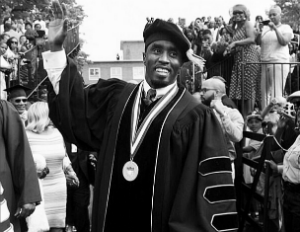 Sean “P. Diddy” Combs can now officially add doctor to his name, as he received an honorary doctorate degree in humanities from his alma mater, Howard University on May 10.

Along with receiving his honorary degree, the now Dr. Combs also addressed the Bison crowd as their 2014 commencement speaker. And while Howard’s selection of Diddy as their speaker came with much controversy, the entertainment mogul gave a raw and honest speech filled with life and career lessons from which that anyone can learn. See some of the best highlights from his speech below.

1. “Do you know how powerful you are?”: Dr. Combs encouraged all of the graduates to believe in themselves and recognize that they have the power to make a difference.

4. “Some of your dreams are going to take longer than you think.”: It’s important to have patience and recognize that your career goals aren’t going to be reached overnight. Diddy explained how it may have taken some students four years and others five years to get their degree, but it took him more than 20 years to get in a position to be standing on that stage. Regardless of how long it takes the next person, know that great things come with time.

5. “One of the biggest lessons I learned in life is that you cannot achieveÂ  success without failure.”: In talking about his early career failures, and even recognizing the mistakes that he makes today, the Howard alum wanted it to be clear that a lesson is learnt in every failure and that no one should be afraid to mess up.

6. “You can’t wait and sit in that darkness. The only way out is to step forward. To face your fears. To become your own light.”: After getting fired from the record label job that he left Howard University for, with no degree under his belt and a baby on the way, the entertainment mogul let the crowd know that he second guessed his decisions and had no clue what to do next. But instead of soaking in uncertainty and darkness for too long, Dr. Combs tells the graduates that the only way to move forward is to recognize your own power and not let your fears control you.

7. “Don’t be afraid to close your eyes and dream. But then open your eyes and see.”: Diddy encouraged the class to not allow their dreams to only live in their imagination, but to actually open their eyes and take the proper steps to see those dreams manifest.

8. “You have to be honest with yourself. You have to tell yourself the truth of what it’s going to take for you to be successful.”: In going after their goals, Dr. Combs encourages the students to be realistic about the work it will take to reach those goals and make sure that they’re prepared to take on the challenge.

9. “The only way forward is to decide that you want that dream so bad that you’re going to work harder, get up earlier, and stay later. You’re going to push past the people that doubted you, laughed at you, and hated on you.”: No success story comes without hard work, dedication and lots of doubters, but Diddy doesn’t want the bumps in the road to discourage anyone and urged the graduates to do whatever it takes to achieve their dream.

11. “Remember the power of you.”: Diddy is constantly criticized for being too cocky and flashy, but one thing for sure is that the mogul is confident in himself and recognizes his own power and he encouraged the HU graduating to recognize the influence they can have.

12. “Can’t stop. Won’t stop.”: The Howard alum encouraged the class to never give up, and for the times when they do feel like throwing in the towel to think of him singing this motto in their ear.