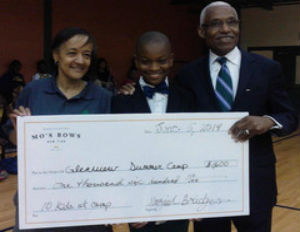 He’s not even a teenager, but Moziah Bridges is well on his way to becoming a fashion magnate.

The 12-year-old was hit with the entrepreneurial spirit early. While his classmates were playing video games and watching sports, Moziah, at the age of 9, built himself a $150,000 bow tie business.

In 2011, he established Mo’s Bows, a line of handcrafted bow ties sewn from scratch, and since then the world has been his oyster. This past May, Moziah was recognized with a 2014 Black Enterprise Small Business Award, named Teenpreneur of the Year at the Black Enterprise Entrepreneurs Conference & Expo in Columbus, Ohio.

On his company Website Moziah says he owes it all to his granny.

“If it weren’t for my granny, I just might not be the next big thing! When I couldn’t find ties that had enough shazaam, Granny stepped in and taught me how to make my own. I’m very thankful that she is not only in my life, but that she pushes me to be the best.”

His grandmother taught him to sew by hand and to use a sewing machine. Friends and family reportedly fell in love with his designs and encouraged him to start a collection. He fashions his designs using vintage fabrics and embeds his ties with floral and African prints.

Business Insider says, “Moziah now has five staff members and has received a ton of media attention, from an appearance on the TV show Shark Tank to features in O Magazine and Vogue.

“Designing a colorful bow tie is just part of my vision to make the world a fun and happier place,” Moziah says. He likes to wear bow ties because they make him “look good and feel good.”

Hey, the young man has grasped the intricacies of dressing to impress at an early age.

Moziah plans to attend college and start a major clothing line by the time he turns 20.

And, check this out, he donated $1,600 to send 10 children from his hometown of Memphis to summer camp. Here’s part of what he said on his blog.

“This summer I donated $1,600 to the Glenview Summer Camp. It felt really great giving back to my community, and I know that those kids will enjoy it. The money I donated came from selling the Go Mo bow tie, and gave 10 kids the opportunity to attend camp.”

Mo’s Bows are featured in shops and boutiques in seven states. He believes real men should tie their own ties, and he even has a bow tie knotting tutorial on his Website.