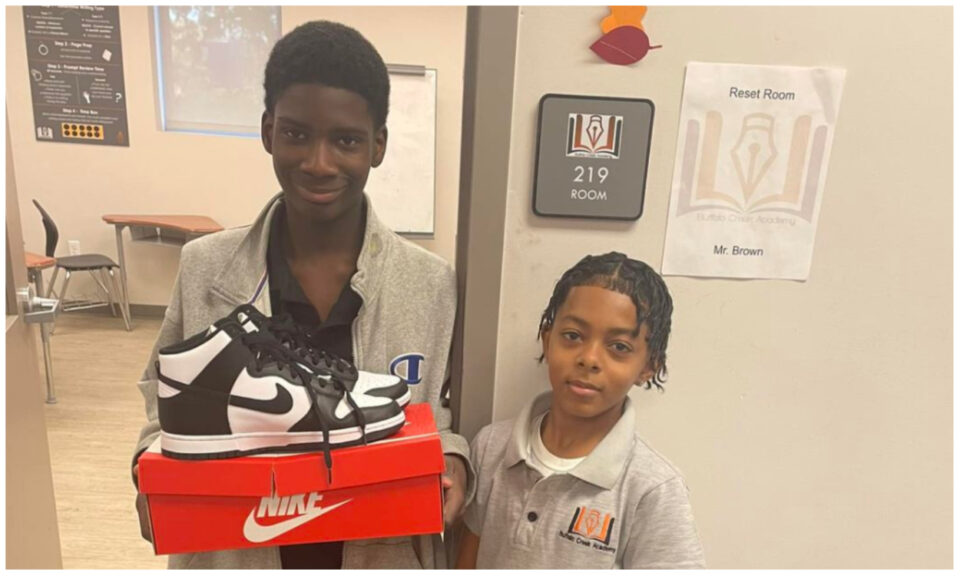 A 12-year-old New York boy is in the news after he used his allowance to buy a pair of new shoes for his friend. Romello Early, who is also known as Mello, said he was tired of seeing his friend Melvin Anderson, who is also 12, being bullied at their school in Buffalo over his sneakers.

According to The Washington Post, Early called his mother one day after class at the Buffalo Creek Academy Charter School, and he was in tears. Early told his mom that his friend was being bullied over having muddy sneakers. Both boys are seventh-graders at the school.

“I’m getting tired of them bullying my friend about his shoes. It’s making me so upset… Can we go buy him some shoes?”

Early’s mom, Anita James, said that when she returned home from work, the two discussed the situation further and her son asked if he could either use his allowance or a future Christmas present to pay for the shoes. “Can I use my allowance, or you can take something away that I would get for Christmas?”

James said that she was impressed by her son’s determination to help his friend.

“I was floored, because most kids are not willing to give up something to another child; most kids are about themselves,” said James. “Just to see at that age he was acting as an adult, it touched me in a way that I almost can’t even describe.”

That same evening, James took her son shopping and he bought his friend a pair of $135 Nike Dunks with the money he’d saved from his allowance.

“You should always treat people the way you want to be treated,” said Early. “I have a lot of stuff, so I was thinking, let’s bless somebody else today.”

Anderson said that he was constantly being made fun of over his shoes, which the other students called “dirty.”

The dean of culture at the New York school, Byant Brown Jr., was so moved after hearing the story that he posted a picture of the boys on Facebook with a caption telling the backstory. “My student Melo told me he was tired of other students picking on Melvin about his shoes. Melo used his allowance and bought Melvin some shoes. This is what I live for

be that helping hand.”

Anderson’s father, Wesley Anderson, was disconcerted and surprised to learn that his son was being made fun of at school. He also noted that Melvin is humble and never mentioned he needed new shoes. “He’s a very humble young man,” said Mr. Anderson. “I never had an inkling about it at all until I heard about Mello,” he added. “I hope this is contagious for other children. Maybe they’ll realize that being kinder to another person goes a long way.”