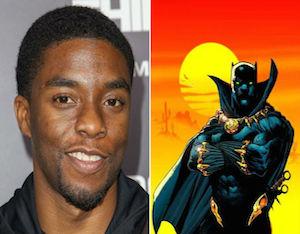 If you have been living under an adamantium rock for the past month or so, you might’ve missed news that Marvel was planning to announce their ‘Phase 3’ initiative.

Happening recently at the El Capitan Theater, Marvel Studios president Kevin Feige rolled out the list of films running through to 2019. Starting from Captain America: Civil War to Avengers: Infinity Wars which will be broken down into a two-part series in 2018 and 2019.

One of the biggest news bits was that Black Panther would be in that ‘Phase 3’ unveiling. We were happily rewarded with the new that Chadwick Boseman would play T’Challa, the Wakandan royal, otherwise known as The Black Panther.

According to Deadline, Boseman, fresh off of appearances as Jackie Robinson (42) and James Brown (Get On Up), signed a lucrative five-film deal with Marvel Studios. He will make his first appearance as the Black Panther, in uniform, beginning in 2016 with Captain America: Civil War.

This is impactful for many reasons, but one to take note is that Chadwick Boseman will be the first African American lead to headline a stand alone tentpole Marvel film. While others also applied for the role (Michael Jai White was a strong contender), Boseman won convincingly over quite a talented lot.

With the announcement in the rearview and a countdown till Avengers: Age of Ultron in full swing, we highlight the Twitter reactions from you as the celebration of Black Panther’s arrival is just getting started.