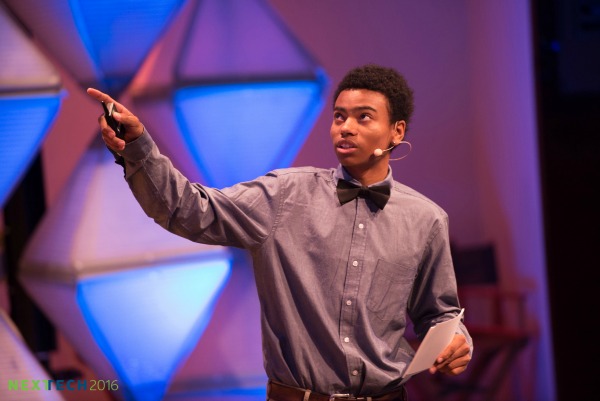 We’ve been swamped here at Black Enterprise preparing for BE Smart Hackathon 3.0, held this year for the first time just prior to the Black Enterprise TechConneXt Summit—the definitive place to be if you’re into all things tech.

Speaking of all things tech, I’ve discovered a young tech phenomenon in the Bay Area where our conference will be held: George Hofstetter, a 17-year-old high school senior at Alameda Community Learning Center.

Like many of today’s young people, George isn’t waiting for opportunity to come his way—he’s creating it. At 16 he started his own tech company, George Hofstetter Technologies Inc. Last month, he was one of five honorees at a gala of the Equal Justice Society. He is also hosting and co-producing a project sponsored by Capital One Dev Exchange called UP to CODE vol. 1. UP to CODE is a free mobile curriculum for middle schoolers that’s focused on closing the digital divide.

Although George isn’t one of the students who’ll be competing in the BE Smart Hackathon—he’s still in high school, after all—similar to those students, George illustrates how tech proficiency can be used to attack some of society’s most intractable problems—like racism and violence.

I recently spoke with George by way of email.

BE: When did you get involved in technology?

I found out I was interested in technology when I was 13. One of my best friends, Desmond, invited me to a hackathon powered by Qeyno Labs, an Oakland-based tech company. At that hackathon we created an app to help private school students of color support one another through their experiences of racism. At the time I was attending a private school and experienced institutionalized racism. We found a way to help other students.

After that first hackathon, I wanted to really change the world’s perspective on race through technology. That year I taught myself four programming languages. That really opened my eyes to what it means to be an innovator and not just a consumer of technology. At 16 I started my own tech company, George Hofstetter Technologies Inc.

BE:  You also do public speaking. You spoke at Capital One headquarters?

I was invited to speak at Capital One’s NextTech2016 conference. It was great speaking in front of banking professionals and developers. They hold so much power for how the black, Latino, and other minority communities experience essential things like banking and financial literacy. We all need more financial knowledge. My grandfather George McDaniel is a retired investment banker and bank president so I do know that world a little bit, but we can always learn more.

BE: I understand you’ve developed a controversial app.

My latest app is called CopStop, the 21st century key to staying safe from police brutality. I submitted the app to the app store and it was sent back for errors in the code. Although I can and will fix it, right now I am overwhelmed with college applications and running my company.

BE: What are you planning to pursue professionally?

I plan to pursue a career in computer science and psychology. I think artificial intelligence (AI) and cybersecurity are the most fascinating subjects in computer science, so I’m extremely excited to learn more. I am now applying to college and really want to go to UCLA, so UCLA if you are reading this, I’m right here!

BE: Who are your mentors?

I attribute my success in the tech space to my mentors who have always supported me, particularly Kalimah Priforce, headmaster and CEO of Qeyno Labs; Howard Sueing of Google; Jeff Tudor, Chief of Police in San Leandro, and many others. I also mentor younger kids at a program called The Hidden Genius Project. My success as a public speaker I have to attribute to my mom.

Inspired? For more information about George Hofstetter, visit www.meetgeorge.info. And to register for the Black Enterprise TechConneXt Summit, go here.