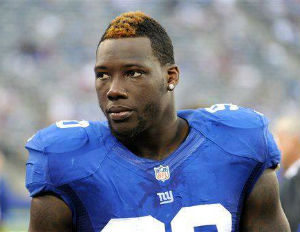 NY Giants’ Jason Pierre-Paul has dominated football headlines since Monday, when reports were confirmed that he had injured his hand over the Independence Day weekend in a freak firework accident. Today, ESPN reported that as a result of the damage to his hands, Paul had his right index finger amputated Wednesday afternoon, citing a source as well as medical records.

Per ESPN – “Pierre-Paul discussed his options with his medical team and family members, according to a source, and decided that the amputation was the best decision for his health and his career going forward.â€

The 26-year-old Paul had enjoyed one of his most productive seasons as a pro in 2014, and was awarded the ‘franchise tag’ by the NY Giants as a result. As detailed previously, he’s technically not under contract for the upcoming season as he hasn’t signed the offer. Earlier this week, the Giants’ pulled a previous long term offer off the table.

In a separate incident, it’s being reported that Tampa Bay Buccaneers cornerback C. J. Wilson was also injured this weekend and lost two fingers, as a result of another firework accident. Per ESPN, Â the 25 year old Wilson’s injury was made public when his father spoke on local Charlotte WBTV, saying – “the fireworks did not pop out of the canister when they exploded.â€

The Buccaneers issued the following statement regarding the injury –

“We are aware that C.J. was involved in an accident that occurred over the July 4th holiday… It is our understanding that the injury occurred to one of his hands, and our primary concern at this moment is for his long-term health. We have been in contact with C.J. and are continuing to monitor the situation.”

Both Jason Pierre-Paul and C.J. Wilson are in less than ideal contract situations, as Paul’s contract remains unsigned, and Wilson is in the final season of his two-year deal that carries a non-guaranteed base salary of $585,000 for the 2015 season.

In an attempt to centralize all the available information regarding Pierre-Paul’s injury, ESPN writer Dan Graziano provides perhaps the most necessary bit of perspective. In his report, he acknowledges that as disappointed as fans, team personnel, and the media, may be in their actions – these players are still two human beings.

“I know everybody wants their football team to do well. But Jason Pierre-Paul is a 26-year-old man who just became a father and is dealing with a scary, life-altering trauma… He’s the one sitting in a hospital bed wondering how this is going to affect his life, his career and his family… These players are people, not merely characters who appear in a TV show every Sunday afternoon in the fall. We lose sight of that too often, and as we process all of this over the coming days, weeks and months, it’s worth pausing to think about the real-life part of it.â€