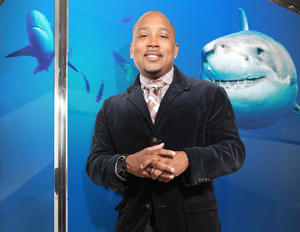 Daymond John helped revolutionize urban fashion in the 1990s as founder, president, and CEO of FUBU (“For Us, By Usâ€). He guided the iconic brand into a multimillion-dollar business, placing it at the same table with such designer sportswear labels as Donna Karan New York and Tommy Hilfiger.

These days, John is known for being a “sharkâ€ on the hit reality series “Shark Tank”. Every Friday night, some seven million viewers tune in to the ABC show that features a panel of investors, or “sharks,â€ that consider offers from aspiring entrepreneurs seeking capital. John, a member of the cast since the show’s premiere in 2009, along with four other prominent chief executives listens to business pitches (a contestant’s one-hour pitch is edited down to a 10-minute segment) from everyday people hoping to take their company or product to new heights. Using their own money, the sharks have invested more than $20 million, having completed more than 30 deals with an average valuation of $250,000. John is the show’s second leading investor.

Studies show that African American-owned firms are less likely to receive angel investment. In the first half of 2013, only 8.5% of startups pitching to angels were minority-owned; 16% were women-led, according to a report by the Center for Venture Research at the University of New Hampshire. Only 15% of those minority-owned businesses successfully got funded, while 24% of the female entrepreneurs received angel investments. Moreover, ethnic minorities account for less than 5% of the angel population.

Like John, a number of people are providing startup and early stage capital to companies, including those owned by minorities. Take tennis champion Serena Williams, who invested in the mobile and video sharing app Mobli. And actor Wendell Pierce has invested in a chain of convenience stores, Sterling Express, and a grocery store called Sterling Farms.

Having a business idea or product that resonates with a potential investor is key to raising capital, says John, who has created a namesake three-day program, the Daymond John Academy, to help entrepreneurs from those just starting out to the experienced. “People come to guys like us because we do not impose the restrictions or the number of requests that the banks and the financial institutions do,â€ he says. “We do risk investments. Ten percent of our capital ends up creating a return, and the return is greater than all the risks taken.â€

An angel is an affluent person who invests his or her own money in a business startup, usually in exchange for convertible debt or ownership equity. In the U.S. there are currently about 7.2 million accredited investors, or individuals who earn $200,000 or more each year or whose net worth (not including their home) exceeds $1 million. Deals can range from $150,000 to $1 million, but the average angel investment in the first half of 2013 was $337,850.

For entrepreneurs seeking accredited investors Blackenterprise.com identified 20 angels you should know about.

“Angel investing is important to the entrepreneurial and investment ecosystem, particularly as it relates to job creation, disrupting poverty and closing the wealth gap in America,â€ says Rodney Sampson, angel investor and executive in charge of diversity and inclusion for “Shark Tank” and One Three Media (A Hearst/Mark Burnett Production JV). Sampson encourages black accredited investors to become angels and to learn how to invest or co-invest (via seed and venture funds). He recently created blackangels.US as an extension of his Opportunity.UP: Unleashing Private Equity conference program.

“Investing is the ultimate way to give back. It offers the greatest opportunity to create generational wealth and opportunities for sustainability for generations to come,â€ adds Sampson who wrote “Kingonomics: Twelve Innovative Currencies for Transforming Your Business and Life Inspired by Dr. Martin Luther King Jr.”

“Where Deals Are Madeâ€, the slogan of the Black Enterprise Entrepreneurs Conference + Expo, also includes the deal flow of angel investment. Returning to Columbus, Ohio, for the second time (May 14—17, Hyatt Regency), the conference will serve as a gathering place of angels. Entrepreneurs will get the chance to meet with and present their businesses to investors who are looking to write checks for enterprises that are fundable and scalable.