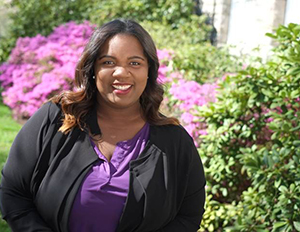 Arrielle De Souza on the campus of the University of Rhode Island (Image: Joe Giblin)

Arielle De Souza, a 2016 graduate of the University of Rhode Island, earned not just one, but two bachelor’s degrees after completing URI’s acclaimed five-year International Engineering Program: a B.S. in ocean engineering and a B.A. in French.

Students in the program spend one year abroad; De Souza spent 14 months in France studying at URI’s partner university, UniversitÃ© de Technologie de CompiÃ¨gne, for six months and interning at a French engineering company for another six months. She also spent a couple of months in the south of France.

Before college, she had studied Spanish.

Starting a foreign language at the age of 18 was pretty risky, but De Souza relished it.Â “I found it refreshing, especially after my courses in physics, calculus, and ocean engineering,â€ she says.

BE Smart spoke with De Souza about her extraordinary accomplishments and the advice she has for others.

It’s pretty amazing that I’m fluent in French. I think it’s important to be a global citizen and well-rounded. My parents emphasized studying abroad and acquiring foreign language fluency. My twin sister, Annelle, is now fluent in Spanish and will be studying for a master’s in global business in Barcelona, Spain.

In the fall, I’ll be doing a master’s in offshore energy engineering at ENSTA Paris Tech (officially Ã‰cole nationale supÃ©rieure de techniques avancÃ©es), a grande Ã©cole–an Ivy League-type school. It’s the oldest engineering school in France and one of the top engineering schools in the world.

What advice do you have for others?

What you put into your experience is what you’ll get out of it.

I’ve pulled all-nighters. I’m a coding junkie–there were times when I would wake upÂ every three hours, because my code would take a couple of hours to run. I know what it is to work very hard, andÂ I love it.

All engineering majors are required to work on a senior capstone project. I worked with three other students and a world-renowned professor to develop a tsunami detection algorithm using high frequency radar on Vancouver Island. He’s also Belgian–so working with him provided an excuse to speak French!

Shut off your mind and everyone’s opinions and open your heart. As an African American woman in STEM, I’m a minority within a minority–it’s a male dominant field. But I never took it to heart, because if I know what I’m doing, I can get the job done. I’ve established a reputation for being a hard worker.

Determination and ambition are the two most powerful things a person can have. I am also a happy, peppy person, so do things that make you happy.