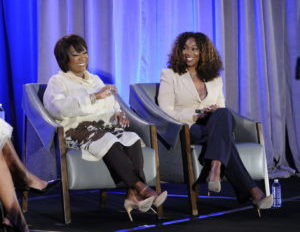 Day twoÂ of the Black EnterpriseÂ 2017 Entrepreneurs Summit was packed with black star power, enlightening panels, and multiple breakout sessions that empowered attendees with the tools and knowledge to take their businesses to the next level.

Hosted by Nationwide, the conference began with an inspiring message delivered byÂ Pastor Kirbyjon Caldwell. He also took a moment to praise Black Enterprise for being a premier brand of inspiration for black business owners.

During one of the breakout sessions, Black Enterprise Silicon Valley Tech Editor Sequoia Blodgett moderated a panel discussion on raising capital for your business in the tech space.Â The panelists, Jason Towns, CEO and managing director of Groundwork Ventures andÂ Tye and Courtney Caldwell, the co-founders of ShearShare, shared tips on how entrepreneurs can tap into bothÂ traditional and non-traditional capital sources. They also talked about the importance of business owners being prepared before meeting with a lending institution.

Blodgett later moderated a second tech panel, “How to Use Technology to Protect and Grow Your Business” hosted by Nationwide. There were also panels about using the web to build your business brand, hosted by FedEx, and seizing opportunities in the energy industry, hosted by Shell.

During lunch, a select group of entrepreneurs were honored during the 2017 Entrepreneurs Summit Small Business Awards, which recognized the top Teenpreneur, Family Business, Franchise Owner, and Techpreneur of the year.

Subsequently,Â Koch Industries hosted a fireside chat, featuring its billionaire CEO Charles Koch and Thurgood Marshall College Fund President & CEO Johnny C. Taylor. They held a critical discussion on how to cultivate the next generation of entrepreneurial innovators and value creators by harnessing the proven success of HBCUs and expanding the availability of youth entrepreneurship programs.

Another highlight during the summit was the Walmart panel discussion on the food business featuring Yolanda Adams and Patti LaBelle. The two Grammy Award-winning legends talked about what it takes to get products into the marketplace, on the shelves, and into the hands, mouths–and hearts–of consumers.

“Be able to do more than one thing in life,” said Adams, which can help you maintain multiple streams of revenue.