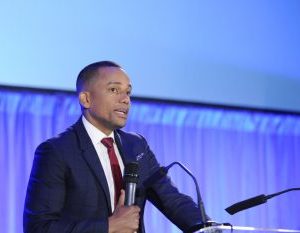 Day 3 of the 2017 EntrepreneursÂ SummitÂ was filled with insightful panels, powerful presentations, meetup sessions, and the BE 100s 45th Anniversary Celebration & Awards. Plus, attendees had the opportunity to shop at the expo hall, relax in the AT&T digital lounge, and sign up for one-on-one business consultation provided byÂ expert business coaches.

The day began with an energizing #FridayFitness workout class sponsored by Nationwide.Â Later that morning, Hill Harper delivered a moving presentation sponsored by Toyota about pushing past fear in order to liveÂ our best lives and achieve new levels of success. The award-winning actor, entrepreneur, and investor weaved in and out of the crowd, urging themÂ to take a leap of faith into their destiny. Fear is an energy that can createÂ mental barriers and limit our potential, he explained. It can even stifleÂ business opportunity. On the other hand, “the future actually belongs to those who can innovate, belongs to those who are bold, belongs to those who can take risks,” he said.

Another highlighting moment was the fireside chat between Black Enterprise President/CEO Earl “Butch” Graves Jr. and Kase Lawal, the founder and chairman of CAMAC International. With holdings in Nigeria, South Africa, England and the Cayman Islands, the multibillion-dollar company is one of the largest black-owned businesses in the U.S.

Lisa “The Inventress” Ascolese shared invaluable advice and information about what to expect when bringing an idea to market during her presentation about inventing, patenting, and profiting from new ideas.