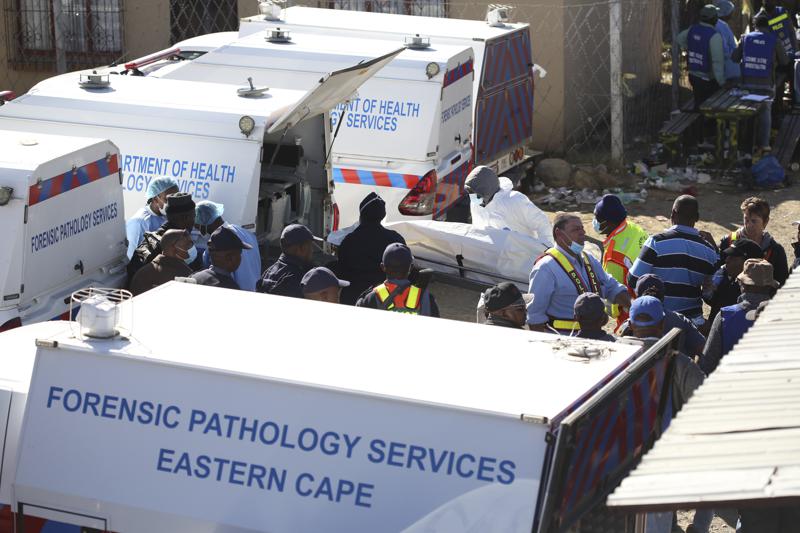 A body is removed from a nightclub in East London, South Africa, Sunday June 26, 2022. (AP Photo)

South African authorities are investigating the mysterious deaths of at least 21 underage teens who were partying after school exams at a nightclub in the coastal town of East London.

AP News reported that the police discovered the victims’ bodies, the youngest 13-year-old girl, “lying on tables, slumped in chairs and couches, and sprawled on the club’s dance floor in the early hours of Sunday morning” without any visible signs of injuries.

“They died as they danced,” Police Minister Bheki Cele said. “They dance, fall, and die. Literally.”

He added: “Others would just feel dizzy, sleep on the sofa, (and) die. It tells you the story that they were all kids because somebody should have taken note.”

Police responded to a call to the Enyobeni Tavern in the city of East London in Eastern Cape province at around 4 a.m. Sunday morning. Seventeen teenagers were pronounced dead at the scene; two more died at a local clinic, one died on the way to another hospital, and one at the hospital. Cele said the victims’ ages ranged from 13 to 17.

It is uncertain what led to the deaths, but police have already sent forensic samples from the victims to a toxicology laboratory to investigate possible ingestion of poison or toxins.

It is illegal under South African law for anyone under age 18 to consume or buy alcohol, so Cele raised concerns about why the underaged teenagers were being served. As a result, the Eastern Cape Liquor Board said it was nullifying the nightclub’s liquor license and would bring criminal charges against the club’s license holder.

The partying teenagers were reportedly celebrating the end of mid-year exams and a local DJ’s birthday. The South African government announced on June 22, 2022, that the remaining COVID-19 regulations had been revoked.

Parents were asked to come to a mortuary to identify their children after the incident. The Eastern Cape health department confirmed that survivors were being treated in the hospital for “backache, tight chests, vomiting, and headaches,” per AP.

The police minister held back tears outside the mortuary, having witnessed the lifeless bodies strewn across the nightclub.

According to Cele, the toxicology tests might take “a lot of time.”