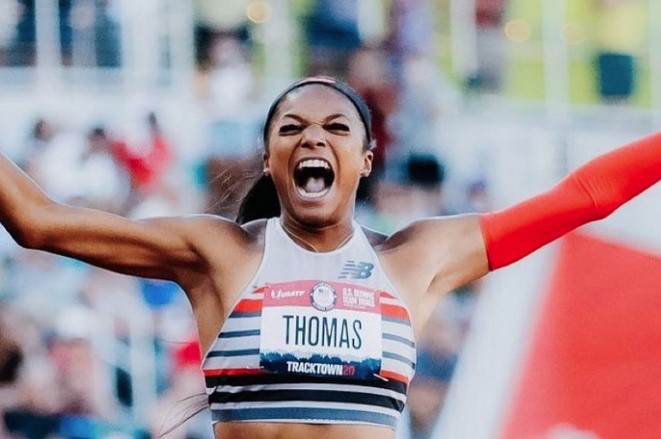 Gabby Thomas is making headlines for winning the women’s 200 meter dash during Saturday’s U.S. Olympic trials. She clocked in at 21.61 seconds, making her the second fastest runner of all-time, NBC Sports reported. The 24-year-old athlete ranks right behind world-record holder Florence Griffith-Joyner. Her record run of 21.34 seconds remains untouched since her 1988 Olympic Games in Seoul victory.

“21.61 seconds – best to ever do it behind Flo Jo,” Gabby wrote on Instagram. “And I’m an Olympian!!!!! So so so grateful to everybody – especially my coach. Sending love to everyone who has supported me up to this point and to my new supporters. We’re just getting started.”

Gabby Thomas has captured a spot in the Tokyo Olympics next month. The event begins on July 23, 2021.

Thomas beat her best records in all three rounds of the women’s 200 meters at the U.S. Olympic Track and Field Trials.  After her victory, she reflected on her journey and the power of this moment.

“I remember sitting in my granny’s house, and my mom told me to turn on Olympic Trials because she saw someone who reminded her of me,” Thomas says as she recalls watching Allyson Felix in action.

She adds, “Her humility and grace, and how good she is at what she does. She’s really the one that has been inspiring.  To be on the team with her, it makes me want to cry.”

Olympic medalist Allyson Felix participated in Saturday’s race and placed fifth in 22.11. She did not qualify to represent the USA in the event in Tokyo. However, Jenna Prandini (second place in 21.89) and Anavia Battle (third place in 21.95) will be heading to Tokyo this summer to represent Team USA.

The record-breaking Florence, Massachusetts native has a background that positions her well for placement in the history books.

Thomas is currently pursuing a master’s degree in epidemiology and health care management. In 2019, she earned a bachelor’s degree in neurobiology and global policy from Harvard. She was recruited by the Ivy League School to compete in the 100 meter, 200 meter, long jump, and triple jump. Thomas enjoyed a standout career at Harvard, becoming the first women’s sprinter in Ivy League history to win the 200-meter event at the NCAA championships, according to the Boston Herald. She also took home 22 conference titles in six different events.

Now, the decorated Harvard grad is taking her career to new heights. From watching the Olympic Trials on television to becoming the newly crowned 200 meter champion in the country, Thomas leaves us with some words of inspiration.

“I remember when I was a little girl watching [Olympic Trials], it just felt so far out for me,” Thomas said. “Do what you want. Dream big and take what is yours… If I can do it, you can do it.”