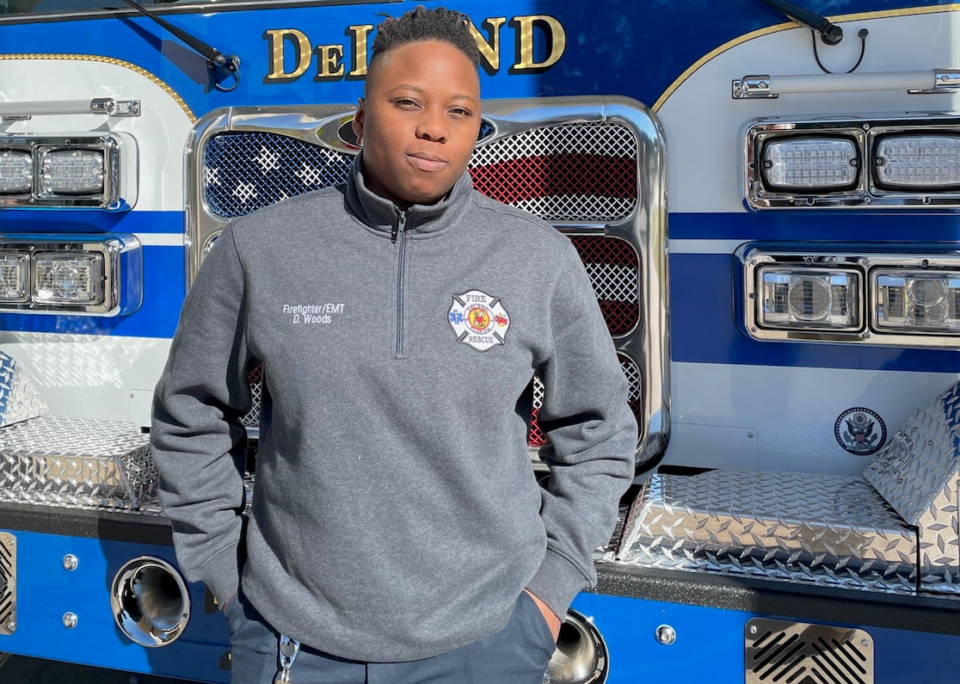 24-year-old Dejah Woods made history as Deland’s first-ever Black female firefighter. Founded in 1876, Deland is a small city located in Central Florida. The city has experienced many firsts that have distinguished it over the years.

Now, Woods is a part of the city’s history as one of three women and four diverse individuals on a 49 member firefighter team. She’s inspiring an entire generation of girls to expand their career options.

“If I can be that person to let little girls know that there’s a possibility that you can be where I’m at too — that’s definitely something that I want to do,” Woods told NBC.

From Childhood Dream to Firefighter Reality

Kids are typically given the arduous task of trying to determine what they want to be when they grow up. But for Woods, the decision was simple. She aspired to become a firefighter.

Growing up in Volusia County, Woods spent her time playing flag football. Her female coach was married to a firefighter and suggested the career as a possible option for Woods.

Community impact has always been at the top of Woods’ priority list. Woods set her eyes on pursuing a career as a firefighter and enrolled in fire college. She breezed through the exams, applied for the job, and nailed the interviews.

Deland Fire Department Chief Todd Allen commented on Woods’ superior performance during the physical and written tests, according to a local news outlet. “We also had two panels of interviews we went through, independent interviews, but she rose to the top of both of those,” Allen shared.

Woods is excited to join the department and grow with her new team. “Not only am I excited about it, you know, I’ve got the courage to want to go into a burning building and save whoever is in there,” Woods says. “I want to be the best fireman I can be,” Woods told ABC.

Inspiring the Next Generation of Female Firefighters

At 24-years-old, Woods has her entire career ahead of her. While she plans to save lives in her city, she also wants to inspire more girls through her work.

“They will say, oh girls can do this, oh girls can do that,” Woods told The West Volusia Beacon. “Most of the time, they don’t say, oh, hey, you can be a fireman. Nobody ever told me that growing up. This is just something I came across and figured out that I love.”

Woods is a part of a small group of female career firefighters. According to 2018 data from the National Fire Protection Association, only 4% of the firefighters in the country are women.

“It may be rare for me but the guys welcomed me with open arms. They don’t treat me any different than anyone who has been working here for 15 years,” Woods told CBS.

Woods added, “A lot of young girls — they don’t get somebody telling them that this is something they can do,” Woods said. “Definitely feels good. All of it feels good.”