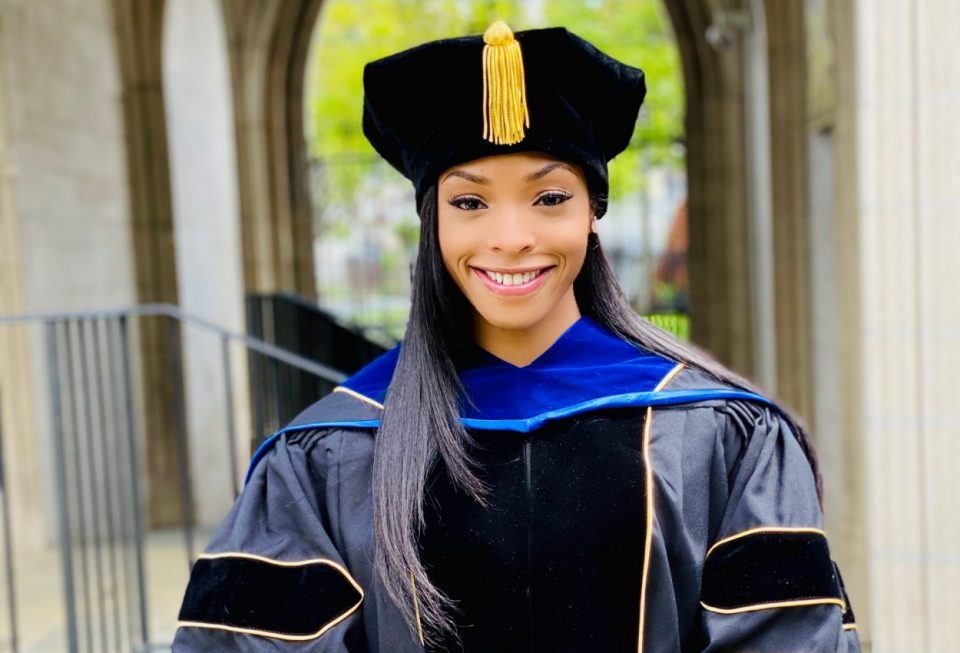 At just 27 years old, Jamila Mustafa speaks with the command of a woman nearly twice her age. Each of her words is intentional and delivered in an authoritative tone that reflects her self-assurance. Yet, her charisma, stage presence, and career highlights as a host on MTV, ESPN, and BET make her a relatable voice for her generation. Hence, there’s no wonder why the award-winning broadcast journalist, actress, and entrepreneur became Bennett College’s youngest commencement speaker in the HBCU’s 147-year history.

During her address, the Delaware native shared a glimpse of her journey as a small-town girl who moved to New York City to pursue her dreams in the media and entertainment industry. After graduating from Delaware State University, Mustafa landed a gig hosting a pilot series on BET.com, where she worked for minimum wage and woke up each day at 3 a.m. to research, write, and do her own hair and makeup in preparation for the show.

“Fast forward three years later and that show that I helped to launch on BET became BET’s top digital daily series,” she told the grads, adding, “I, personally, had grown to become a desired talent not only by BET Networks but by the majority of the media platforms surrounding the globe.”

At another point in her speech, Mustafa recalled the “wise words” imparted by her grandmother, Fannie Carroll, who graduated from Bennett in 1949. “Never let success get to your head and failure get to your heart,” she said. “See this game called life will teach you, but you have to play to learn and understand that whatever won’t fold you will mold you.”

Mustafa, who hosted MTV’s TRL: Top 10, a reboot of the network’s wildly popular Total Request Live (TRL), also addressed Bennett’s financial struggle. The school, which became the first higher education institution for black women in the country in 1926, lost its accreditation in February 2019, despite almost doubling its fundraising goal of $5 million within six weeks. However, a court ordered the accreditation to remain in place pending the school’s lawsuit against the accreditor.

“I’m not sure of another group of women, who when their backs were up against the wall, raised $9.5 million in 60 days to save their institution,” she said. “That is resilience.”

Mustafa says she was personally asked to address the class of 2020 by Bennett College President Suzanne Walsh. The two originally met at the 2014 BLACK ENTERPRISE Women of Power Summit. At the time, Walsh was serving as the deputy director of the Bill & Melinda Gates Foundation’s Postsecondary Success division. Meanwhile, Mustafa was one of 10 HBCU students who were sponsored by the foundation to attend the event. Hungry and driven, Mustafa used the opportunity to conduct onsite video interviews with the speakers and ended up making an unforgettable impression on Walsh. In addition, she caught the attention of both conference leaders and organizers and was the only student asked to return for a second year.

“What I really remember is that when we attended a conference together in 2014 and she brought with her (as a college student) all of her equipment and started interviewing women who were interesting to her,” said Walsh during the commencement ceremony. “She took advantage of that moment.”

Walsh continued, “When I thought about who would be the best speaker to represent this moment in time, we needed to have somebody special,” she said. “We needed somebody who was inspiring and dynamic, likes to take on new challenges and some risks. We wanted someone who could capture and hold people’s attention through a virtual experience.”

In addition to being the keynote speaker, Walsh tapped Mustafa to conceptualize and help produce the school’s first-ever online commencement through her production company. “Jamila helped to create an experience that was exactly right for our graduates and their families and friends. She helped us create an emotional journey honoring the past and celebrating the present. I wish I could find the words to truly express how perfect, Ms. Mustafa’s commencement address and leadership were for this moment in history,” said Walsh in a press release post the event.

Joining the ranks of past commencement speakers such as Maya Angelou, Phylicia Rashad, and BET co-founder Sheila Johnson, Mustafa says delivering the address was an honor and a true full-circle moment.

Like she told the graduates, “It takes a special kind of soul to be able to inspire the masses and move mountains.”