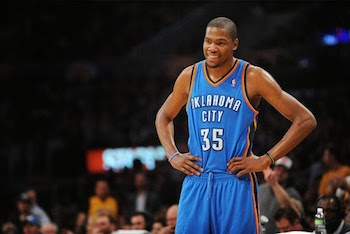 Reigning NBA MVP and league scoring champ Kevin Durant is getting paid and Nike and Under Armour will have to decide which one is going to write the hefty check.

According to ESPN, Durant, who is now repped by Roc Nation has a deal on the table with Under Armour worth between $265 million and $285 million over 10 years. ESPN also reports the deal includes stock options and other perks including a community center built in his mother’s name. Remember the boy loves his mom, if the MVP acceptance speech given by the Oklahoma City Thunder forward is anything to go by.

Here’s where it gets complicated. Nike will have the right to match, which is a condition written into Durant’s present contract with the company. Durant can still choose Nike if it doesn’t match but can’t legally choose Under Armour if Nike does match.

If Durant decides to shoot down Nike and embrace Under Armour this would be the largest sponsorship deal the company has ever committed to. ESPN says the average of $26.5 million to $28.5 million means that Under Armour would be devoting nearly 10% of its current annual marketing budget on him.

And if you’re thinking Under Armor can’t compete with a sports merchandising juggernaut like Nike consider this. Shares of Under Armour are up an amazing 62% year-to-date in 2014, and up about 200% since early 2013 accounting for a UA stock split earlierÂ in 2014, according to Business Insider.

Under Armour has given investors notice that it might hit $3 billion in revenues this year. And only about 1% of all that loot is from basketball shoes.

Of course the swoosh has a $68 billion market cap compared with UA’s $15 billion, but investors with an eye to growth in the stock market are paying big premiums for Wall Street winners and Under Armour stock continues to show resilience in both top-line growth and earnings expansion in a very competitive environment.

Forbes also notes, Under Armour stock just posted its 17th consecutive quarter of 20% plus revenue growth. Growth at more than 20% each quarter for the past four years is just incredible. It screams buy, buy, buy!

ESPN also reports Under Armour shares are up 96% over the past year, compared to those of Nike, which are up only 21.5%. Among public athletic shoe brands, no company has performed better than UA over that time period.

Since only 1% of UA’s revenue is basketball-driven, the company has to guarantee Durant his money up front, instead of the typical shoe deals that offer a minimum guarantee plus up to 5% royalty on the wholesale revenues.