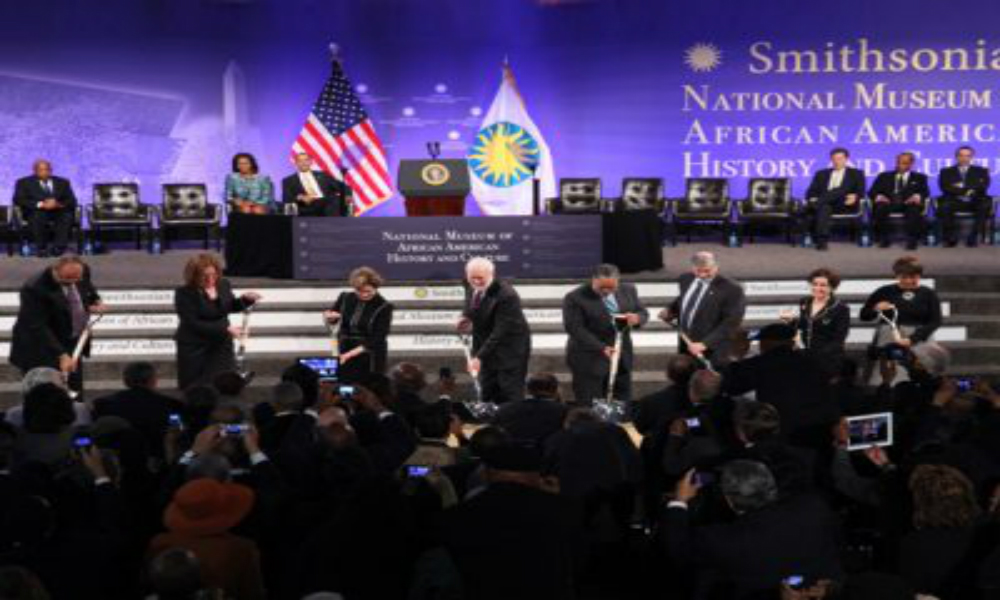 I remember the unseasonably, mild February morning when more than 600 of the most prominent, powerful business and political luminaries — including President Barack Obama and First Lady Michelle Obama — gathered in Washington, DC to participate in history: The groundbreaking of the Smithsonian Institution’s National Museum of African American History and Culture.

At the time of the groundbreaking, founding director Lonnie G. Bunch III said that the importance of the vision was recognizing and honoring African American history and culture and demonstrate “the need to make better all who visit the National Museum, by using African American culture as a lens to more clearly understand what it means to be an American.â€

What I also found impressive about Bunch was the fact that as he uncovered artifacts representing the “wide arc of history, ” including slavery, Reconstruction, the Harlem Renaissance, the Great Migration, the Civil Rights Movement and other eras, the noted scholar and historian became an amazingly adept fundraiser of.$250 million in donations from corporations, organizations and individuals.

As I wrote at the time —and still believe — the campaign serves as a powerful model for strategic philanthropic fundraising – whether your organization is mammoth or miniscule.

Assemble A Credible Board of Advisors

After civil rights legend Rep. John Lewis fought more than 12 years to secure authorization, President George W. Bush signed legislation in 2003 to establish the 19th museum within the Smithsonian complex. Congress committed $250 million over 10 years, so Bunch must make regular trips to Capitol Hill to sway legislators to provide funding for the institution’s annual budget. The NMAAHC team has had to raise the other $250 million through private donations.

Bunch told me that he was not guided by “a lot of management theory, but by all our ancestorsâ€ and that led to his clarity of intent and working with a board designed for fundraising success.

In June 2005, Bunch had to contend with an intimidating meeting at NMAAHC, a month before he officially took the helm. “I walk into my first board meeting. I’m looking for my name, and I am between Oprah Winfrey and Dick Parsons,’â€ he reflects.

Bunch knew that members of this advisory council had vast strategic acumen, enviable global contacts and, most important, a burning desire to erect a monument to black achievement. Sixteen of the 24-member advisory council were African American, many among the NMAAHC’s largest donors. For example, the Oprah Winfrey Foundation has contributed $10 million or more and Bob Johnson has given $5 million or more. Chenault’s American Express has given $5 million and Allan Golston, president of U.S. Programs for the Bill & Melinda Gates Foundation, helped guide the organizations’ investments of $10 million.

Assembling such a group of respected corporate and civic leaders offers a vital lesson for those on the local level. Bunch said his council gave the museum instant credibility. “You had to show that the major players cared about this, and because there would have to be so much private fundraising, which is more than we’ve traditionally done at the Smithsonian, the decision was to make sure the board had a strong corporate leadership,â€ Bunch said at the time, citing that the group weighed in on every strategic decision involving the museum’s development and management.

Communicate Your Vision With Clarity And Passion

Bunch found that the NMAAHC’s leash was shorter than that of most nonprofits because the museum operates under government oversight as part of the Smithsonian complex. The team had a playbook, a set of principles and policies that had been developed by the founding presidential commission. It was up to Bunch to call the plays, though. “I learned you’ve got to have confidence in your vision, but be smart enough to let other people help shape it,â€ he said.

One of Bunch’s strengths is his ability to sell the mission, whether conferring with congressmen on the Hill, talking to CEOs in the executive suite, or chatting up a group of senior citizens at a community center. Observers said he has a talent for connecting with people on the emotional level, and that’s what makes people write checks. He was also successful in building partnerships with local museums and historical societies.

NMAAHC approached fundraising from a standpoint of “abundance, not scarcity,” said one staffer, and did not waste time on those who may suffer from “sticker shock.” The group also targeted five key metros: New York, Washington, D.C., Atlanta, Chicago, and Los Angeles, “philanthropic citiesâ€ that are among the nation’s largest, headquarters for large corporations and comprised of diverse populations that embrace multicultural causes.

The team wanted as many African Americans as possible to play a role in the museum’s development so the campaign for dollars was not just focused on members of the 1%. NMAAHC has developed a grassroots effort as well, pitching charter memberships for as little as $25. In fact, the group has received gifts of $5 from senior citizens, and about $600 in coins from the Brooklyn Heights Montessori School. And added social media outreach to the mix. The lesson; Gaining small contributions is just as important as large corporate donations in reaching your fundraising goal.

FacebookTwitterYoutube
← Tech Innovator of the Week: Brock Christoval, CEO, Flyspan ← 11 Black-Owned Businesses That You Should Know and Support
×