30 Hilarious Memes From The NBA Finals 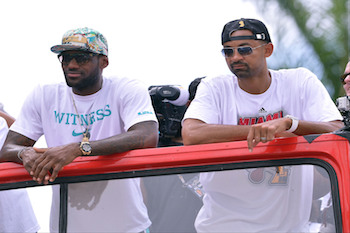 It was written in the stars after the San Antonio Spurs took a commanding 3-1 lead that they would overthrow the Miami Heat as champions.

With the inevitable making itself apparent during last night’s (June 15) NBA Finals, the smell of Internet slander loomed in the wings for LeBron James, Dwyane Wade, and Chris Bosh. Everyone who was a fan or not anticipated that the South Beach “Big Three” would get trounced under the weight of social media mockery.

In historic fashion, the Miami Heat were mimicked, spoofed, blasted, and made to be the butt of every joke and meme that flooded the Internet. Diehard LeBron fans will surely brush this off, as the champion from Akron, Ohio can take it. But for those waiting to wallow in the warm waters of their opponent’s misery and sorrow the morning after another NBA Finals loss, these 30 hilarious memes are for you to enjoy!

Get ready to laugh loud and hard.