4 Actresses on How They're Taking on Hollywood 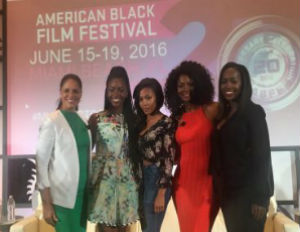 As Hollywood continues to struggleÂ to understand theÂ various needs of global audiences,Â storytellers–from the creators to the actors involved–are finding ways to build. In a panel discussion at ABFF moderated by journalist and author Soledad O’Brien,Â Â Teyonah Parris, Nicole Beharie, Emayatzy Corinealdi, and Aja Naomi King talked about the lessons they’ve learned thus far, adding a few tips for budding actresses that are looking to jump into the game.

“With the emergence of new platforms, we’re able to tell our own stories. Now mainstream networks are paying attention,” says Parris. The most progressive changes are being made and seen on digital platforms.Â Working withÂ Amazon on the popular seriesÂ Hand of God, Corinealdi has been directly affected by opportunities in the digital space. “We now have social platforms, and people are speaking up, saying they want to be represented,” says Beharie.

More and more independently produced series are making the leap from the Web to television, confirming the shift in the entertainment landscape. Last year,Â BET picked up three Black&Sexy TV digital series. Also, Issa Rae, creator of the popular Web seriesÂ Awkward Black Girl,Â inked a deal with HBO,Â and her new show, Insecure, will premiere this fall on the network.

Next Step? CREATE Behind the Camera

“I want to direct, produce. I know I can do that,” says King. WorkingÂ with Nate Parker in Birth of a Nation inspired her in understanding the need to createÂ behind the camera; that it is part of a bigger purpose. “Producing is something I’ve wanted to do, and I got the chance with the Miki Howard Story,” says Parris. The film, which premiered on June 12 and also starred Parris,Â broke record ratings,Â becoming the top original movie in network history.

All actresses agree that it’s imperative to build a team with anÂ agent, manager, or lawyer that really believes in your vision for your career.

This team should also include mentors. Beharie feelsÂ we should go to our elders for that wisdom, and once received, it’s essential to pass that wisdom on. Corinealdi mentioned that Ava DuVernay is a friend and has been someone who has had her back in the industry. King revealed that Viola Davis hasÂ been instrumental in mentoring and giving advice.

Many of the black actresses in Hollywood are going out for the same roles. When O’Brien asked about the element of competition, King replied, “I’m notÂ competing with others, I’m only competing with myself. If it’s for you, it’s for you.” All agreed. “It’s about sharing opportunities and celebrating with each other,” says Parris.Â Â Corinealdi adds, “The more opportunities we get, the better it is for everyone. It’s a warm, comforting feeling to see others get jobs.”