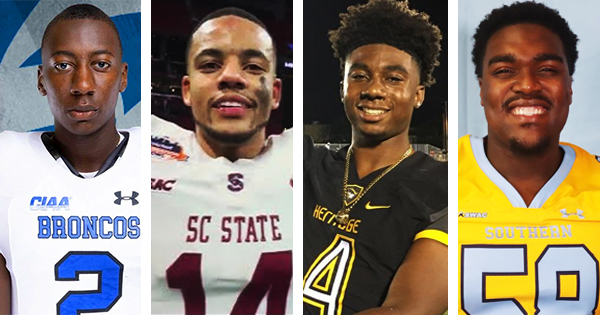 Four college football players from HBCUs have been selected in the 2022 NFL Draft. This is a big deal because, in 2021, not even one HBCU student was drafted into the league.

The first HBCU player selected in the 2022 NFL Draft was Fayetteville State cornerback Joshua Williams. Kansas City Chiefs selected Williams, who stands six-foot-three, with the 135th pick overall in the fourth round.

Secondly, South Carolina State cornerback Decobie Durant, who was awarded MEAC Defensive Player of the Year, was selected by the Los Angeles Rams with the 142nd pick overall in the fourth round.

Thirdly, Jackson State outside linebacker James Houston IV, who was earned Newcomer of the Year, was selected by the Detroit Lions with the 217th pick overall in the sixth round.

Finally, Southern offensive lineman Ja’Tyre Carter, who has shown great blocking skills, was selected by the Chicago Bears with the 226th pick overall in the seventh round.

“Let’s go, NFL. HBCUs! Everybody that has anything to do with an HBCU, you should be shouting right now and dancing. As a matter of fact, hit the organ right now,” he said in an Instagram video he posted.