4 Branding Tips to Help Students Get Accepted to College 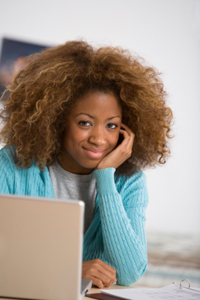 As the admissions process gets increasingly competitive, the Class of 2015 is forced to come with their A-plus game, and, of course, nothing short of stellar credentials. And while the number of college applications received nationwide continues to increase, the college acceptance rate is dropping. Case in point: Columbia University. The Columbia Daily Spectator revealed the Ivy League institution has a lower admit rate than fellow Ivies–Princeton University, Stanford University and Yale University–coming in at 6.4%. Despite the heightened competition, there are several surefire ways college-bound students can make a name for themselves before, during and after the admissions process. For one, it’s never too early to encourage these young adults to begin branding themselves.
BlackEnterprise.com spoke to Marlon D. Cousin, managing partner of The Marquin Group, about establishing your brand, why your essay doubles as a resume and what seals the deal with college admissions boards. Here are several tips college-bound students can follow to establish their personal brand and, ultimately, get the coveted letter of acceptance:
Define your brand
Give yourself a self-assessment, factoring in what you’re doing now, but also keeping in mind your aspirations and future educational or career goals. If you need help developing your brand, reach out to someone who knows you well in a professional light, such as a guidance counselor or mentor. Once you’ve brainstormed, craft a personal brand statement. It should be simple and straightforward.
Let your college essay speak to your performance in and out of the classroom
A student’s college essay is just as important as overall grades, extracurricular activities and SAT scores. It’s your chance to show the college board why you stand-out, who you really are and why you’re a qualified student for the chosen university. Cousin notes writing about yourself is not the easiest task, but it’s a make or break factor in the overall package. It’s something you should take time and thought when crafting.
“Your resume is really your essay that talks about who you are, where you’ve been, the uniqueness of you, what you bring to the university, what you want to study, why you want to study that, how you want to impact your community, [and] how you want to impact the world,â€ says Cousin. “That’s what they’re looking for. That’s their resume.â€
Draft a list of takeaways for your prospective university
What are the three things, no more than five, you want the university to know about you? The interview process is the time to convey those points.
Also, now is the time to show your interest in the school, as well as see if the school’s a perfect match for you. Ask in-depth and detailed questions about campus life, the breakdown of the university’s student-body and academically, what they’re looking for in a student.
Be consistent
Your brand should read true, both on paper and in-person. Hence, during the interview if you’re letting your interviewer know you are a hard worker who prides yourself in academic excellence than your transcript should reflect that. Cousin says a university’s admissions office is looking for students that exemplify leadership qualities, challenge themselves academically through college-level or Advanced Placement courses, has strong recommendation letters, and standardized test scores that fall within the college’s acceptance frame. “Universities want to know what you can bring to our campus that is uniquely different than some of the other students that are just clones.â€