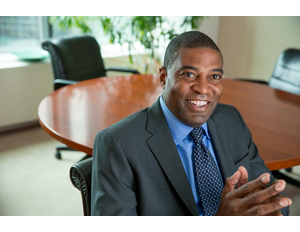 Over 45 days, BLACK ENTERPRISE shares 45 milestone events among the nation’s largest black-owned businesses that have had widespread impact on black economic development and American industry across four decades. This is in tribute to the 45th anniversary of Black Enterprise’s iconic BE 100s yearly list of the largest black-owned companies.

Today we reveal No. 39 in the web series “45 Great Moments in Black Business.”

1997: Handling an underwriting assignment for oil giant Texaco, Blaylock & Partners becomes the first minority-owned firm to serve as lead manager for one of the 500 largest publicly traded companies

He was called one of the “new breed.” In the 1990s, that was an appropriate description of the enterprising investment banker Ronald E. Blaylock that author Gregory S. Bell wrote in his BLACK ENTERPRISE book, In The Black: A History of African Americans on Wall Street (John Wiley & Sons; $24.95).

Bell should know. His late father Travers Bell Jr. was the barrier-breaking entrepreneur who co-founded Daniels & Bell, the first black-owned investment banking firm to purchase a seat on the New York Stock Exchange in 1971. Unlike pioneering CEOs like the elder Bell, Blaylock was able to launch his firm by striking a partnership with a white-shoe Wall Street firm.

After working stints at Citicorp and PaineWebber, where he gained a rep for being lead salesman of mortgage-backed securities and partial to the energy sector, and the  co-founder of a black-owned investment bank, the Winston-Salem native decided to launch his own shop. Known for being one of the hoop stars on the heralded Georgetown University Hoyas of the 1980s, Blaylock scored big when in 1994 he convinced venerable Wall Street firm Bear Stearns to buy a 25% equity stake in his startup for $10 million—one of a handful of African Americans who had been successful in structuring such arrangements.

It didn’t take Blaylock & Partners L.P. long to make a name for itself on The Street in corporate underwriting and break new ground in transactions that early pioneers like Daniels & Bell were unable to engage in some 20 years earlier.

From an Act of Racism Comes Astounding Success

In the following excerpt from his powerful book, Greg Bell shares B&P’s amazing deal, developed, in part, from an act of racism that set it on the path to phenomenal growth and at the same time helped open doors for African Americans in the corporate finance arena:

The firm that received the majority of headlines in the late 1990s was Blaylock & Partners. So successful were they during this period that BusinessWeek described the firm, “A Minority-owned Firm Hits the Major Leagues.” The areas in which they were working were unexplored for a black firm. They were the first black investment bank to finish in the top 20 in corporate debt. The firm began its climb in 1996 when it participated in its largest deal to that date, a $300 million offering for the Tennessee Valley Authority in a syndicate exclusively comprising minority-owned firms including Muriel Siebert and Pryor McClendon Counts.

Then it became the first black investment to underwrite a corporate bond offering for a Fortune 500 company. A wall that has stood so strong for so long does not usually come down unless there are special circumstances. This was the case in 1996 when Texaco became engulfed in controversy. It all started when a group of black middle managers filed a racial discrimination lawsuit against the oil giant. The plaintiffs claimed that the pay and promotions were far from meritorious and sometimes were given according to preference instead of performance. The matter persisted sluggishly as only the legal system can, but a tape emerged in 1996 of a meeting that had taken place two years earlier. The tape horrified many but revealed attitudes that some knew were always beneath the surface. Top Texaco officials, including its treasurer, were heard using racial slurs and negative characterization to refer to African Americans. After employees were fired and apologies offered, many wondered, what next? Then-New York Comptroller H. Carl McCall threatened to sell the more than 1 million shares of Texaco stock in the state’s pension fund. Rev. Jesse Jackson threatened a boycott until significant changes were made. Soon, the company announced a diversity effort and then settled with the plaintiffs in the initial lawsuit for $176 million.

Although it was disturbing to see just how strongly ancient prejudices still existed within some of the highest offices, there was an interesting irony because these racist Jim Crow attitudes actually provided an opportunity for African Americans. Shortly after the situation in January 1997, B&P was named the lead underwriter for a 10-year note offering for Texaco. Blaylock acknowledged that the turmoil at the company certainly opened doors to discourse between his firm and the financial officers at Texaco. However, all parties point out that the firm walked into the offices and presented the idea for the deal, and executed it well. So in demand were the bonds, that the offering was increased $50 million from the original amount of $100 million, with Blaylock & Partners selling most of the bonds.

Blaylock Seals the Deal with Texaco

Despite the senior management team’s commitment to contract more minority suppliers due to the scandal, B&P initiated the deal, properly priced the offering and, then-Texaco Treasurer James F. Link told BE, the transaction went “extraordinarily well. We announced it in the morning, and we closed it shortly after lunch. That’s about the time you would anticipate for a transaction that’s $150-$300 million.”

The favorable execution of that deal for the issuing company and buyers helped set the stage for B&P’s participation in some of Wall Street’s biggest deals of that era, including the initial public offerings of Prudential Financial, Genworth Financial, and Google. Its performance led to BE naming it Financial Company of the Year in 1998 and B&P handling $83 billion in fixed-income and equity transactions to become the nation’s largest black investment bank during the turn of the century.

The significance of the deal to black financial firms overall? As Ariel Investments CEO John Rogers characterize such events: “It was a Jackie Robinson moment.” Despite the circumstances for how the deal evolved, B&P demonstrated that black investment banks could serve as lead managers on such transactions and perform at the highest standards. Still challenged with gaining such opportunities, the Texaco deal paved the way for BE 100s investment banks and asset managers to gain greater consideration in deals that came later, from Wall Street to Silicon Valley.

As for B&P, its period of successive deal-making triumphs enabled the former Hoya star to achieve a glorious championship season. Travers Bell—and others that came before Blaylock—would have beamed with pride.