The 49ers Should Fire Tim Ryan Over Comments About Lamar Jackson 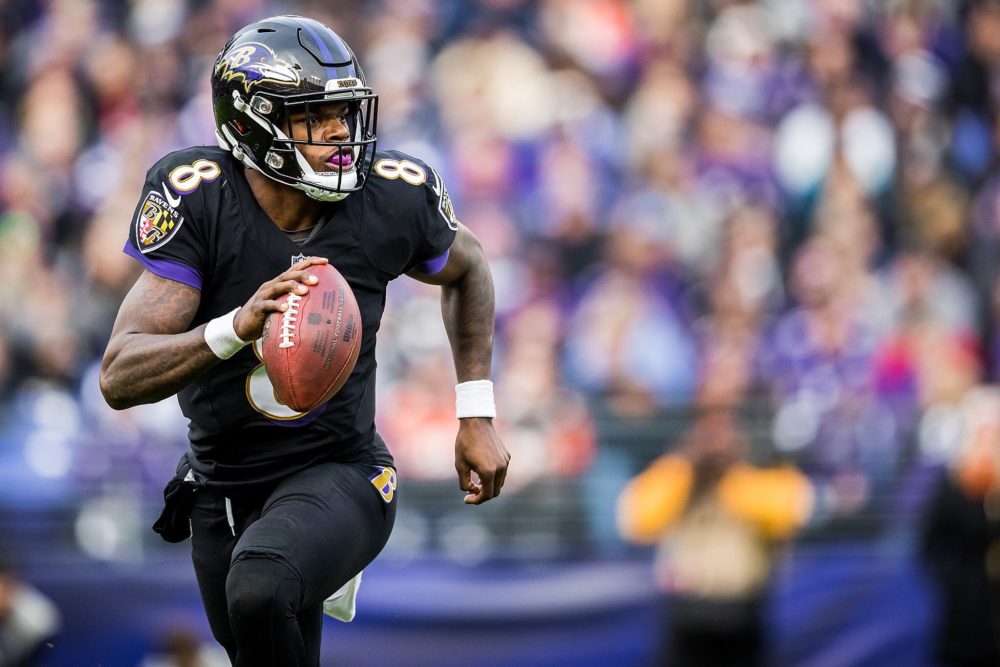 The San Francisco 49ers called a flag on the play by suspending their radio color analyst Tim Ryan Wednesday for racist comments he made on a Bay Area sports talk show Monday in which he asserted that Baltimore Ravens quarterback Lamar Jackson had been adept at faking handoffs because of his “dark skin color with a dark football.”

The problem is that Ryan’s penalty – a one-game suspension – is grossly inadequate, amounting to nothing more than a gimmick play to dismiss the incident without any real consequence.

Here’s what happened: As reported by The San Francisco Chronicle, Ryan made his comments during his weekly segment on KNBR’s “Murph and Mac” morning radio show as the hosts reviewed Jackson’s role in the Ravens’ 20-17 win over the 49ers. The potential league MVP rushed and passed for more than 100 yards in the contest between the two top-rated teams. During Sunday’s game, he used his “running quarterback” strategy of faking a handoff to a running back and completing the play himself.

Ryan’s comments: “He’s really good at that fake, Lamar Jackson, but when you consider his dark skin color with a dark football with a dark uniform, you could not see that thing,” Ryan said on air. “I mean you literally could not see when he was in and out of the mesh point and if you’re a half step slow on him in terms of your vision forget about it, he’s out of the gate.”

In a statement to The Chronicle, the 49er’s front office maintained that they were “disappointed” and by his commentary and that “he must be more thoughtful with his words” before imposing the suspension for the Dec.8 game. Ryan displayed apparent contrition, expressing regret to the 49ers and Jackson.

The History of Bigotry Against Black Players

Dr. Harry Edwards, an acclaimed sociologist and a long-time civil rights activist that has advised prominent black athletes, shared with The Chronicle his thoughts before and after Ryan’s suspension. After listening to the radio clip, he was “particularly troubled that Ryan’s comments perpetuated the bigotry involving black players and particularly the quarterback position.”

In the email message sent to the media outlet before Wednesday’s suspension, he wrote: “I know Tim and he is not of a maleficent mind relative to these types of issues — but of course that does not mean that he gets or should get a ‘pass’ regarding his comments on Lamar Jackson and assigning ANY dimension of Lamar’s undeniable brilliance at QB to his skin color — a raw and sensitive assessment and assertion not only because it is profoundly obtuse and ignorant on its face and carries implications that I’m certain were not intended, but because skin color has been such a factor in rationalizing denial of Black athletes’ opportunities to play the QB position over most of the NFL’s 100 years of existence.”

He further asked in his statement that “are we really to believe that White QB’s are at a strategic disadvantage?”

Although Edwards said that Ryan is “a good guy who made a regrettable remark” but still framed the episode as a “learning moment.” His tweeted after the suspension.

TIM RYAN IS A GOOD GUY WHO MADE A REGRETTABLE REMARK : THIS MAKES HIM HUMAN, NOT “BAD”. LET’S EVERYONE LEARN FROM THIS AND MOVE ON. 49ers suspend broadcaster for saying Ravens QB Jackson had advantage due to ‘dark skin color with a dark football’ https://t.co/Vivr8MPAes

Yes, the incident is a teachable moment. Ryan’s comments and his comfort in delivering them represent part of a history and pattern of how the mainstream media has characterized black athletes for more than five decades.

As legendary NBA champion, scholar, and 2016 Presidential Freedom Award recipient Kareem Abdul Jabbar wrote in a 2018 series of articles on sports and race for The Guardian: “The ‘natural talent’ myth is used against black athletes.”

He cited one of the most prominent examples of CBS lead sports prognosticator Jimmy “The Greek” Snyder’s comments during a 1988 Martin Luther King, Jr. Day interview in which he asserted that black athletes were exceptional “because of his high thighs that go up into his back.” He decided to assume the role of pop historian of the Antebellum Era, maintaining that “during the slave trading, the slave owner would breed his big black to his big woman so that he would have a black kid.”

Jabbar further wrote that Snyder did not see black athletes gaining positions that required intellect or leadership. As expected, Snyder’s comments were greeted with outrage from African Americans and the Tiffany Network summarily fired Snyder.

That’s but one example. A myriad of studies confirm a history of such inflammatory language regarding black sports figures at collegiate and professional levels. For example, in a 2010 study, “Roughing The Passer: The Framing of Black and White Quarterbacks Prior to the NFL Draft,” authors Eugenio and Vicent F. Filak conducted a comparative analysis of a publication’s decade-long portrayal of black and white NFL prospects. Reviewing more than 4,700 attributions, they found “data patterns that emphasized racial stereotypes.” African American quarterbacks were primarily labeled “with words and phrases that emphasized their physical gifts and their lack of mental prowess versus white quarterbacks who were characterized as less physically gifted but more mentally prepared for the game and less likely to make mental errors.”

In her 2015 book, “How You See Me, How You Don’t, ” Cynthia Frisby, a University of Missouri journalism professor and a national authority on media portrayals of minorities, found that African American athletes are more likely to be depicted negatively than their white counterparts. According to Voice of America, she identified 55 online news articles from publications like Sports Illustrated, The Bleacher Report, CNN, CBS Sports, Sporting News, Yahoo Sports, and ESPN, and discovered that of the total stories about 39% focused on black athletes and about 44% were on whites. As she dug deeper on specific topics, Frisby found roughly 67% of crime-related articles involved African American players compared to about 22% for whites players, In stories on domestic and sexual violence, about 71% reported on the activities of black athletes versus about 18% of white athletes. And when it came to training, work ethic, and commitment, roughly 43% were focused on whites while 36% featured blacks, VOA reported of Frisby’s findings.

Such stereotypical descriptions and imbalance of coverage – from the intellect of African American players to off-court activities – have greater implications on how society views the black community as a whole than just within the sports arena. Collectively, not only has such language been derogatory, insulting, and painful to African Americans, but it also feeds negative images within and beyond American borders.

That’s why Edwards is spot on when he says Ryan should not be let off the hook – nor any other commentators that make such outrageous, racist commentary. By doing so, it communicates that the denigration of African Americans in any forum comes without real consequence. Significant financial or career penalties reinforce the message that such words and characterizations are always inexcusable and unacceptable. Moreover, we must also must not give corporations and organizations that employ such commentators a pass either. The punishment — or lack thereof — from the leadership team also communicates its culture of permissiveness and tolerance as well as its commitment to African American stakeholders.

Some may just say that Ryan made a stupid remark, apologized and we should be done with this incident. Put into context, Jimmy The Greek said he didn’t believe his statements were racist but he was still taken off the air for them — permanently.

This is an opinion that may not necessarily reflect the views of Black Enterprise.