5 of the Most Far-Out Uses of Robots at RoboUniverse 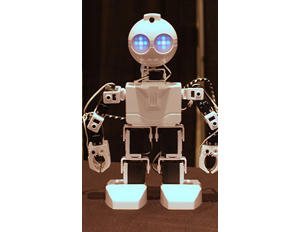 This weekend, the RoboUniverse robot expo was held in New York City at the Javits Convention Center. Robotics companies and researchers hailed from all over the globe to show off the latest in the robotics industry and lend their expertise to a number of thought-provoking panels. Clearly, the robot revolution is underway. Here are 10 of the most mind-boggling uses for robots and robotics presented at RoboUniverse:

[Related: 10 Black Women Changing the World via Science and Technology]

Co-Bots (Cooperative Robots) Will Displace More Human Labor:
Cooperative Robots were a big focus of RoboUniverse. Co-bots are becoming co-workers that are mobile and able to perform just-in-time tasks that are programmed by their human masters.

Robotic Exoskeletons Will Allow the Paralyzed to Walk:
Dr. Homayoon Kazerooni, the founder of suitX, the robotic exoskeleton company, gave a keynote about exoskeletons. SuitX’s Phoenix technology is currently being tested to help paraplegics stand and walk slowly.

The goal is to eventually create exoskeletons that would allow the disabled full mobility and to create suits that human workers can wear to withstand impact and injury in dangerous environments.

The Military is Testing Autonomous Drones to Detect IEDs:
5D Robotics was at the expo displaying its advanced drone technology. Its drones are being used in military exercises to detect and disarm mines and other IEDs. Its IED defeat kit consists of an autonomous mine detecting robot, which can automatically map the ground of a designated area, paired with a heavy duty mine clearance robot which uses 5D positioning to accurately return to marked hazards.

Researchers Want to Physically Connect Human Brains and Robots
An ever-advancing area of research–neurorobotics–explores the science of physically connecting the brain to robotic and mechanical connections and also on building computer models of sections of the brain based on neural network technology. One of the goals of this type of research is to fuse humans and robots to “a physical, mechanical agent which actively supports (healthy, elderly and disabled) people in performing activities of daily living.â€

Robots-as-a-Service (RaaS) is the Next Big Cloud Thing:
Expect to see in the next few years, massive advances in service robots fueled by cloud technology, said several panelists who took part in the “Robots as a Service (RaaS)â€ session at RoboUniverse.

Just as companies can now, thanks to the advent of cloud services, deploy custom data analytics solutions, for example, from cloud technology, businesses are expected to be able to adopt robotic services to fit their needs, as easily as they can now acquire online storage.

FacebookTwitterYoutube
← Steve Harvey is Bringing Home the Bacon and Cooking it With Ease ← Melissa Burgos Chats About Brand Building, Monetizing Your Blog and More
×