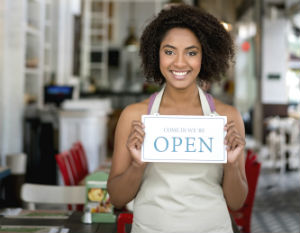 It’s Women’s History Month, and as such, it is a great time to be a female and celebrate women. Despite the fact that there’s still a need for progress in terms of gender equality, women are still killing it in the business world.

According to the 2016 State of Women-Owned Businesses Report commissioned by American Express Open, between 2007 and 2016, African American women, in particular, owned 1.9 million firms, employed 376,500 workers, and generated $51.4 billion in revenue during 2016.

Globally, the numbers are just as promising, too. The 2016 Global Entrepreneurship Monitor report–sponsored by Babson College, Universidad Del Desarrollo, Universiti Tun Abdul Razak, and TecnolÃ³gico de Monterrey–says that in four economies–Indonesia, Mexico, Brazil, and Malaysia–women report equal or higher entrepreneurship rates than men. Likewise, the 2017 Mastercard Index of Women Entrepreneurs report shows that countries, including Uganda and Bangladesh, have the highest concentration of women entrepreneurs, despite very challenging economic and social conditions.

With that in mind, let’s take a look at five female business stars of color to watch and learn from, as we celebrate women who are making boss moves around the world:

A Haitian-American social entrepreneur, Momperousse has tapped into Haiti’s castor oil and other natural ingredients for her eco-luxury beauty brand Kreyol Essence. She employs people in both the Caribbean nation and in the U.S., with 90% of those employees being women. The company touts successes like hiring 350 farmers, women producers, and male workers, and even has a partnership with the Clinton Foundation.

Momperousse’s most recent boss move: She was one of 10 selected to participate in Sephora’s second annual Accelerate Cohort, out of hundreds of applicants from across the U.S., Mexico, Canada, and Brazil. This will provide her with six months of mentorship from international industry leaders and business boot camp training.

Grant, a tech leader in the Caribbean, started GeoTechVision to provide spatial technology and business ICT solutions. With offices based in Jamaica and Guyana, GeoTechVision’s clients include the who’s who of Caribbean government and infrastructure management, such as the Office of the Prime Minister of the Bahamas, the University of West Indies Land Management Division, and the Guyana Ministry of Public Works.

An enterprising mother and wife, Chika Russell founded her London-based snack company, Chika’s Foods Ltd., to promote the vast, rich flavors of West Africa, with a healthy edge. She was once a contestant on BBC2’s Dragons’ Den, the U.K.’s version of Shark Tank. However, even after wowing the judging panel, she declined a Â£30,000 win, and instead opted to make a go of it on her own “because she wanted more of a ‘challenge,'” reports Daily Mail.

Today, this line of gluten-free, vegan-friendly snacks, infused with Nigerian spices and flavors can be found in grocery chains, like Whole Foods and Waitrose, and even in international hotels, such as The Ritz Hotel, London. The brand’s subscription service also offers the chance to support humanitarian efforts: the ‘Snack for Change’ initiative provides educational  resources to African children in need with each subscription sold.

Tiwale is a for-profit social enterprise that empowers women in Malawi through entrepreneurship. Initially with a team of five teens, Chilemba launched Tiwale as a business education program, which included the distribution of microloans. According to the company, the first loan program helped 12 local women start businesses.

The organization offers a variety of programs that are each designed to support the entrepreneurial empowerment of women in Malawi. For instance, the Tiwale Design Project teaches women how to do traditional fabric dyeing and printing, and a portion of the revenue from the sale of these tapestries go toward covering school grant programs and microloans extended through the organization.

To date, Tiwale has trained 150 women in business education programs and has enabled 40 women to start their own small enterprises with microloans, according to its website. In a country where poverty and child marriages are still major issues, this is the supreme boss move.

Kisyonbe’s company Selfina is a for-profit social enterprise that helps women in Tanzania realize the dream of business ownership. Through an innovative model of microleasing, Selfina offers women loans without a focus on the typical eligibility factors, such as collateral and business experience.

Many of Selfina’s success stories consist of women becoming so victorious, that they were able to launch and sustain multiple businesses. The company also boasts results of providing more than 27,500 women with lease financing, leading to the creation of 150,000 jobs. In addition, more than $17 million has been made available to women through the organization’s revolving fund.