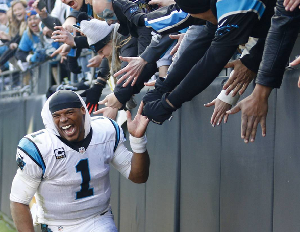 In an all-star performance Sunday night, star player Cam Newton led the Carolina Panthers to a 49-15 win over the Arizona Cardinals in the NFC Championship game.

Set to play Peyton Manning and the Denver Broncos in Super Bowl 50 on Feb. 7, Newton, who was named MVP and Offensive Player of the Year by Pro Football Writers of America, will be the sixth black quarterback and the eighth quarterback drafted No. 1 overall to start a Super Bowl game in NFL history. Meanwhile,Â Panthers head coach Ron Rivera is only the second Latino coach to guide his team to the Super Bowl. If the Panthers take home the big win, the Auburn University alum will also be the first ever quarterback to win the Heisman, a National Championship, NFL MVP, and the Super Bowl.

At just 26-years-old, Newton, who also broke league records this year as the first player in NFL history to throw at least 30 touchdowns and rush for at least eight in the same season, is teaching us all a lesson on what it means to be a true leader in your profession and rise above obstacles and criticism.

Whether making his critics mad by dabbin’ in the end zone or passing out footballs to fans, below are five workplace lessons we can learn from the star quarterback’s presence on and off the field.

1. Practice makes perfect: Entering the league in 2011 as the No. 1 draft pick by the Carolina Panthers, Newton struggled to lead his team to victory as he and the Panthers ended their season with a 6-10 record. With continued hard work and persistence, Newton bounced back and led his team to the playoffs in 2013 and 2014, but lost during the divisional rounds. During off-season training camp before the 2015 season started, Newton told NFL.com “I’m always trying to better myself in a way that might go noticed or unnoticed.” With a 15-1 regular season record and a possible Super Bowl win, Newton’s dedication to improving his performance certainly didn’t go unnoticed this year and it’s a testament to theÂ clichÃ© saying “Winners never quit.”

2. Always be coachable: Recognizing that lessons can sometimes come from the least expected people and places, Cam Newton takes advice from a young fan on how to better throw a football.

3. Ignore the haters and stay true to who you are: “To be doubted, see that’s the key. Just when I think I can’t go anymore, I think about those who doubted me and I do one more rep. I do one more pull-up,” says Newton in his new commercial for Beats headphones. “And if giving a kid a football just for a smile, or dancing after a touchdown hurts other people’s feelings… then guess what? Too bad they don’t make band-aids for feelings.”

4. Recognize that success doesn’t happen overnight: Reflecting on his five years in the NFL, which has consisted of several losses, wins and even injuries, Newton spoke to reporters Sunday night about what the journey has felt like to him.

“Like I said, it wasn’t going to be instant grits, quick grits,” he said. “It was going to be a process like long-cooked collard greens. I think those collard greens are brewing right now. You can smell them from a mile away.”