Women of Power Summit: 5 Lessons We Learned from Mellody Hobson 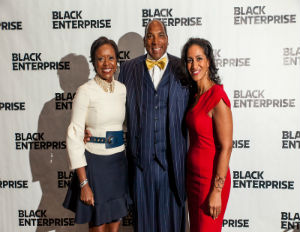 Black Enterprise’s 2015 Women of Power Summit was a major success with over 1,000 registered women coming together to gain inspiration and motivation on how they can upgrade their careers. One of the many highlights from the 10th annual event was the power lunch with Mellody Hobson.

As president of Ariel Investments L.L.C and chairman of the Board of Directors of Dreamworks Animation, Hobson is a power woman who’s been on our radar for years. Speaking about her career journey at Ariel Investments and persistence in climbing to the top, below are five career lessons we learned from the Chicago native’s one-on-one conversation with Caroline Clarke at this year’s summit.

1. Surround yourself with people who challenge you. In talking about her career journey from an intern at Ariel Investments LLC to now the president of the investment firm, Hobson talked about the importance of having the right people around you who will push you to newer heights.

“What helps you grow are the people who actually look you in the eyes and say you can do better,” Hobson told the audience.

2. Be all in with your career. Hobson told Women of Power attendees that when she started working at Ariel she was willing to do anything to prove she was worthy for a leadership position at the company. She told the story of how she monitored the morning routine of the chairman/CEO of the firm, John Rogers, who would start his day bright and early every morning by reading the newspaper at the local McDonald’s. After tracking his schedule, then 22-year-old Hobson started meeting Rogers at the McDonald’s with the same reading material in hand in an effort to buy time to speak to him.

“I was all in,” said the Princeton University alum, who also revealed that she even wrote thank you letters at one point for her bosses then 7-year-old daughter’s birthday party guests.

3. Remain humble. Being raised in Chicago as the youngest of six kids, Hobson talked about the financial troubles she and her family faced growing up and expressed her determination to provide a better life for herself as an adult. When asked three questions by Clarke pertaining to being a perfectionist, having an ego and overcoming fear, Hobson made it clear that there’s no room for an ego in her success journey.

“I don’t walk around carrying an ego,” said Hobson. “I have tremendous humility for the life I have.”

4. Don’t put all your eggs in one basket. In talking about some of the hiccups she’s faced in her career, Hobson opened up about the effect the 2008 financial crisis had on her career and said the biggest lesson she learned was to not tie her success to just one company.

“It’s not a good thing to get my sense of accomplishment out of a company,” she said, while admitting that Ariel lost nearly 80 percent of their assets during the economic downfall.

5. Debunk the myths. In talking about her position as an African American woman leading one of the largest black-owned money management and mutual fund companies in the country, Hobson says she’s constantly fighting off the preconceived notions that have been placed on her.

“So many people come up to me and say they are surprised by how nice I am,” said Hobson. “We have to debunk all myths. It’s an unfortunate barrier that we have to carry, but we do.”