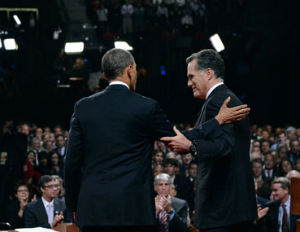 The first presidential debate took place at the University of Denver Wednesday night and if you missed it here are 5 key takeaways:

The line of the debate will likely be, “trickle down government,â€ where Mitt Romney attacked the president on his so-called big government approach. This is a catchy turn of phrase that Team Romney will likely repeat again and again over the next month. The line came in Romney’s opening statement where he said, “Now, I’m concerned that the path that we’re on has just been unsuccessful. The president has a view very similar to the view he had when he ran four years ago, that a bigger government, spending more, taxing more, regulating more — if you will, trickle-down government — would work.â€

In an exchange about the deficit and government spending cuts, Romney first said he would get rid of Obamacare and then went on to discuss funding for PBS which includes standard bearers like Sesame Street.

The key here is that the candidates differ greatly in terms of what to do about tax reform and government spending.Â  Last night, Romney claimed his tax plan would not add $5 trillion dollars to the deficit but independent analysis says otherwise. Cuts to government programs that help middle and working class Americans, and yes fund things like Sesame Street, are not something the president supports across the board. President Obama would much rather let the tax cuts on the rich expire instead of putting an end to Big Bird.

3. The future of Obamacare.

Obamacare and the future of the entitlement programs were a big topic Wednesday night.Â  Mitt Romney’s running mate Paul Ryan has put forth a plan that independent analysis says turns Medicare into a voucher program. President Obama made sure to hit Romney on this point saying, “The idea, which was originally presented by Congressman Ryan, your running mate, is that we would give a voucher to seniors and they could go out in the private marketplace and buy their own health insurance. The problem is that because the voucher wouldn’t necessarily keep up with health care inflation, it was estimated that this would cost the average senior about $6,000 a year.â€

This is a key exchange because not only does Mitt Romney back Ryan’s plan, he’s on record saying he will repeal Obamacare on day one. That means that Americans under 54 will look forward to government insurance coupons to pay for health insurance while living on a fixed income later in life and the seniors currently in the system will have to deal with the return of the “donutâ€ hole as they attempt to pay out of pocket for prescription drugs. Expect fact checkers to have a field day with this segment of the debate.

4. It seemed like debate moderator Jim Lehrer was invisible.

There will be a lot of criticism of debate moderator Jim Lehrer after Wednesday night’s debate. Lehrer seemed almost invisible throughout and President Obama and Mitt Romney controlled the flow themselves going back and forth and interrupting each other which worked to Romney’s advantage, since he was more aggressive throughout the entire debate. It will be important to keep an eye out for how CNN’s Candy Crowley tackles the next debate, a town hall forum style debate, in the hopes that the back and forths run a bit more smoothly. The free flow of the debate may have left some viewers confused and frustrated.

This is the most important takeaway from the debate. After Romney won the primary, senior advisor Eric Fehrnstrom set off a firestorm by saying that the Republican challenger would “hit a reset button for the fall campaign,â€ going on to say that in the general election, “[e]verything changes. It’s almost like an Etch-A-Sketch. You can kind of shake it up and restart all of over again.â€

Since then Romney has not run towards the middle and tried not to appear moderate during the general election, instead choosing to double down on immigration, taxes, and foreign policy. That is until tonight’s debate. Romney used the first debate as a platform to shake up his etch-a-sketch in front of the American electorate and appear like the moderate people probably thought he was coming from the liberal state of Massachusetts.Â  It’s hard to know at this point whether this approach will work and win Romney swing state votes, but it certainly was a deliberate effort by Romney to tone down his rhetoric.Â  While still staying away from any policy specifics, Romney is able to appear reasonable which helps him after months of harsh and unreasonable quotes and headlines.

Overall Conclusion: The beltway media loves a comeback story and will swiftly declare Mitt Romney the winner of the first debate based on exceedingly low expectations. In 2004, John Kerry won the first debate, the polls evened out, but Kerry still lost the election. Voters in Iowa, Ohio, and Florida are headed to the polls now for early voting and it’s not clear anything Romney says or does in any of these debates will matter when he faces the uphill battle for 270 electoral votes head on.