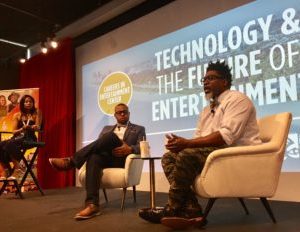 In addition to Hollywood stars, networking mixers, and exclusive film screenings, the 2017 American Black Film Festival (ABFF) included a host of workshops and tech talks geared toward career development. On Thursday, ASPiRE TV presented a panel at ABFF titled “Technology & The Future of Entertainment,” featuring Dre Barnes, the director of Tech & Innovation at UP/Aspire TV; and David Banner, a hip-hop artist and activist. The panel was moderated by Tina Thompson, the director of Programming at Aspire TV, and introduced by BLACK ENTERPRISE Editor-in-Chief Derek T. Dingle.

During the discussion, Barnes and Banner talked about the integration of technology in the business of entertainment and shared a number of helpful tips for business owners and people looking to build their personal and professional brands. Here are a few:

An overwhelming amount of millennials have embraced technology and incorporate tech into many parts of their daily lives. However, a study conducted by Pew Research Center in 2014 revealed that baby boomers have been more resistant to technological advances and devices. According to the study, many of them shy away from using technological applications that they find to be too complicated, while 77% of older Americans need assistance when in the process of learning new technologies.

During the panel, Barnes and Banner explained why all generations should embrace tech, especially when it comes to promoting a business or brand. Banner, for example, talked about how he has utilized tech and social media to help him promote his latest album, The God Box, released earlier this year.

“As far as it pertains to technology and how I was able to promote [my album], from my Instagram to the Twitter, I literally had an opportunity to touch millions and millions of people all over the world just through a click of a button,” he said.

The Mississippi-born rapper also said that technology serves as an equalizer by giving people across all walks of life a voice and a platform to be heard. Technology has “leveled the playing field,” he said, adding that “it gives people the opportunity to do things that we could have never imagined.”

Rather than using tech and social media frivolously, Barnes encouraged the audience to take advantage of analytics that can show entrepreneurs and companies how to reach their targeted demographic more strategically. A lot of times we download apps and just use them without being effective, he said. But business owners should understand which social platforms will allow them to reach their audience best, said Barnes. As an example, he recommended business owners to use Google Analytics, a free analytics service that tracks and reports website traffic.

For those who are late in adapting to the ever-changing and growing tech landscape, Barnes suggested that beginners check out BlackEnterprise.com’s technology section as a resource to learn about the latest tech reports, devices, and news. In addition, he pointed out that Facebook is a great platform to build your business and your brand since it’s the No. 2 advertiser in America behind Google.

Banner added that one of his Facebook Live video sessions received 5 million views. People want to engage with you and Facebook Live gives you the opportunity to do that, he said.

Rather than solely focusing on social media for promotion, Barnes explained the importance of creating an overall digital strategy that allows you to capture and then optimize data. To do this, he suggested setting up email blasts through IBM Watson, a web service that uses cognitive computing to reveal business-critical data and insights. Barnes also suggested that attendees consider sending their audience text messages since “texting has a 90% open rate.”

Like all things in life, Banner warned that people must find a balance between using social media and having human-to-human interaction.

“For me, social media is a job,” said the hip-hop activist. When I’m engaged, I’m all in, but when I’m not, I am a creator. I only spend a certain amount of time on social media, he added.