5 of the Worlds Best Marathons for Your Bucket List 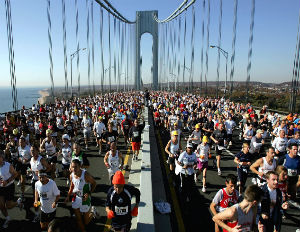 Running a marathon is one of the most popular activities on peoples bucket list. In 2003, even hip-hop mogul Sean Diddy Combs checked the New York City Marathon off of his list. So, whether you want to challenge yourself to experience more, raise money for a cause or simply compete along side 50,000 people, check out some of the best races in the world.

[Related: How To Live the Good Life: Watch 5 Inspirational TED Talks by Women]

Recognized as the world’s largest marathon, the New York City Marathon takes place in November. Since it began in 1970, over 1 million people from 150 countries have participated in the 26-mile race through the five boroughs of New York City.

Although, application for entry into the 2015 TCS New York City race is now closed, you can sign up with one of their Charity Partners. Volunteer opportunities are also available.

If you’re up for the challenge, take note; there are several weeks of mental and physical preparation required. Check out the variety of New York City Marathon Training programs.

Safari tours are another top bucket list activity. Named after the “Big Fiveâ€ African game animals â”€ lion, elephant, leopard, rhino and buffalo, the Big Five Marathon in South Africa gives you the best of both worlds with a race and a safari rolled in one. If you’re ready to sign up for an adventurous trek alongside giraffes, antelopes, lions and zebras, check out marathon tours.

With tough qualifying times for runners to participate, the Boston Marathon is one of the most prestigious and oldest races in the world. According to the Boston Athletic Association, racers must qualify with a time (based on age and gender) from another marathon run in the past year and a half to participate.

Adventure lovers unite by running through Chinese villages and taking 5,164 steps into history. Since 1999, participants from over 60 nations have gathered to conquer one of the world’s toughest marathons. Â Each year, the Great Wall Marathon is held on the third Saturday of May, and offers 3 distances, a full marathon -26.2mi, a half marathon – 13.1mi and 5.5mi Fun Run – a non-competitive run on the wall.

Watch what runners think of the Great Wall Marathon below.

Is running a marathon on your bucket list?Â  Have you completed a marathon? We would love to hear about your experience. Â Leave me a comment below.