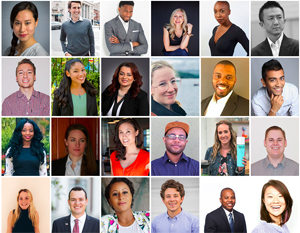 Young, diverse American leaders in the innovation economy will meet with 50 of their Chinese counterparts at the inaugural US-China Youth Forum on Entrepreneurship and Innovation, sponsored by the U.S. State Department and the All-Youth China Federation.

The group will meet in Shenzhen, China, “with the goal of developing international partnerships, securing venture capital, and expanding deal flow and economic opportunities between the two countries,” Fidelity reports.

Terik Tidwell, director of STEM Innovation at Johnson C. Smith University, a historically black college in Charlotte, North Carolina, is one of the Americans heading to Shenzhen on Sunday.

A partial list of the innovators who will be joining him:

Goals of the Forum

“The overarching goal of this action-oriented forum is to encourage synergies among leading U.S. and Chinese entrepreneurs, incubators, and investors to propel private sector collaboration,” William Brashears, director of Global Initiatives at Arizona State University, is quoted as saying in the Fidelity post.

“We’ll also be exploring themes around scaling business globally, social entrepreneurship, and manufacturing in the shared economy. Ultimately, we want to open the access to entrepreneurs in both Chinese and American markets, where traditionally it’s been a challenge,” Brashears says.

Another goal of the U.S.-China Youth Forum is to promote the importance of inclusivity in innovation—”through racial, ethnic, and geographical diversity, women’s empowerment, and socio-economic heterogeneity.”

Other goals include sharing insights and investment opportunities, and accessing Chinese and American markets.

To learn more about this historic global forum, visit the website of the Youth Innovation Alliance.