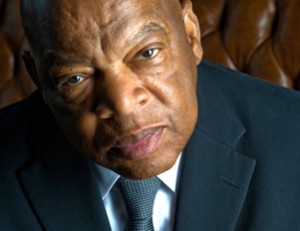 More than four dozen–52, as of Tuesday–House Democrats will be boycotting President-elect Donald Trump’s inauguration on January 20.

While some Democratic lawmakers had made their decision to sit out in previous weeks, several more came forward in recent days, citing the president-elect’s perceived insult of Georgia Congressman John Lewis as the final straw, reports ABC News. Many of them took to Twitter with their announcements; Time listed the House Democrats boycotting the inauguration.

Lewis is the last living organizer of the historic 1963 March on Washington. He is known for leading civil rights protests, including the infamous 1965 march across the Edmund Pettus Bridge in Selma, Alabama, in which state troopers brutally attacked the crowd.

Lewis had declared that he would boycott the inauguration, because he doesn’t see Trump as a “legitimate” president, in light of Russian interference. “You cannot be at home with something that you feel that is wrong,” Lewis told NBC News, in an interview for Meet the Press.

President-elect Trump fired back on Twitter, calling Lewis “all talk, talk, talk” and “no action,” and said that he should focus more on “fixing” and helping his Atlanta-area district, “which is in horrible shape and falling apart (not to mention crime infested), rather than falsely complaining about the election results.â€

Some Democratic members of Congress have said they will be protesting in Washington, D.C. and in their districts, instead. California Rep. Barbara Lee plans to spend the day preparing for resistance. “Donald Trump has proven that his administration will normalize the most extreme fringes of the Republican Party. On Inauguration Day, I will not be celebrating. I will be organizing and preparing for resistance,â€ she said in a statement.

New York Rep. Nydia Velazquez will be participating in the scheduled women’s march, protesting policies that activists say hurt women. “I will not be attending [the] inauguration of @realDonaldTrump but WILL participate in the @womensmarch on January 21st,” she tweeted.

Newspapers cite the boycott as an unprecedented act. During hisÂ Meet The PressÂ interview, Lewis said that this would be the first time since he was sworn-in that he has missed an inauguration.

In a pair of tweets, Trump cited a Washington Post report, in an effort to call Lewis out, posting, “John Lewis said about my inauguration, ‘It will be the first one that I’ve missed.’ WRONG (or lie)! He boycotted Bush 43 also thought it would be hypocritical to attend Bush’s swearing-in….he doesn’t believe Bush is the true elected president. Sound familiar!â€

According to aÂ Washington Post article, written on January 21, 2001, Lewis and other members of the Black Caucus did boycott George W. Bush’s inauguration, because of questions surrounding his Florida recount victory over Al Gore. At the time, he and others didn’t “believe Bush was the true,Â elected president,â€ and Lewis spent the day in his Atlanta district.