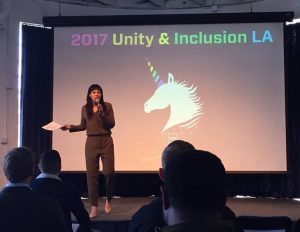 Over the past weekend, I had the pleasure of hosting the 500 Startups Unity and Inclusion Summit–and united it was. It was great to see so many entrepreneurs of color, all in one location, ready to growth-hack their startups to success.

Monique Woodard kicked us off with an interesting fun fact, during her opening remarks. “Black women and Latinas are the fastest growing entrepreneurs,” which doesn’t hurt, with African and Latino Americans having a combined $2.5 trillion in consumer spending power. This gives us more opportunity to keep the dollars in the community. It also lends itself to the reason why Woodard is so focused on African American and Latino American consumer groups for her fund.

Woodard’s opening remarks were followed by James Andrews, CEO of Smashd, an early stage accelerator and venture fund lead by the former manager of Lady Gaga, Troy Carter. While Carter deals with the VC side, Andrews is more focused on branding, which he made very clear as he articulated his business journey through 90s hip hop icons.

Midway, we watched a clip from the short film, She Started It, shining the light on female entrepreneurs in tech. The film focuses on girls who are making moves in the industry and was another talking point that continued to push the conversation of diversity. At the end, they even gave audience members an opportunity to host their own screenings. Many of the panelists were super transparent, giving away as much as their email addresses, to make sure they were contributing to the pipeline, ready and willing to continue to discussions beyond this initial point of contact.

As the host, the one thing that I wanted to make sure of, was that we fostered open dialogue. There were so many touchy subjects related to race, sexuality, religion, and gender, that I felt it was my job to ensureÂ everyone felt safe speaking up. It wasn’t all heavy; we had breakout growth marketing sessions with David Oh, chief product officer of FabFitFun, in addition to a growth hacking session with Andrei Marinescu. Woodard took office hours, answering questions about getting into 500 Startups; and Jon Shieber, a writer for TechCrunch, allowed people the opportunity to pitch him for a chance to appear on one of the most sought after tech sites.

The one common denominator that kept resurfacing was the number of POC in the tech industry, and how disproportionately low it is in comparison to its white counterparts. My take is, if we continue to have these conversations with not just ourselves, but inclusively–black, white, red, or other–those numbers will begin toÂ shift until hopefully, conferences like this won’t be necessary because inclusion will be the norm.

Sequoia Blodgett is a technology editor for Black Enterprise, Silicon Valley. She is also the founder of 7AM, a lifestyle, media platform, focused on personal development,Â  guided by informed pop culture.